The 65th Filmfare Awards had recently concluded on February 15, with telecast happening on Sunday, February 16. Zoya Akhtar's Gully Boy swept away most of the awards with 10 wins. 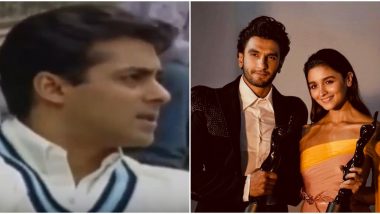 Salman Khan in the ciral video; Ranveer and Alia with their Filmfare trophies for Gully Boy (Photo Credit: Twitter)

The 65th Filmfare Awards had recently concluded on February 15, with telecast happening on Sunday, February 16. Zoya Akhtar's Gully Boy swept away most of the awards with 10 wins. Adding three more trophies that it got during the Technical Awards round, Gully Boy bagged 13 black statuettes in its kitty. This makes the film, starring Ranveer Singh and Alia Bhatt in the lead, earn the record of having the most wins in a Filmfare event, beating Sanjay Leela Bhansali's Black (11 wins) in the process. Gully Boy at Filmfare Awards 2020: Ranveer Singh, Alia Bhatt’s Film Just Created History by Beating Amitabh Bachchan’s Black, Shah Rukh Khan, Kajol’s DDLJ.

While Ranveer and Alia fans were pretty happy with the outcome, there are many others who weren't too pleased with the results and took to social media to share their annoyance. The outrage was also triggered by lyricist Manoj Muntashir's tweet, after he expressed his anger over his song "Teri Mitti" from Kesari losing the Best Lyrics award to Gully Boy's "Apna Time Aayega".

There was also trolling over Ananya Panday winning Best Debutant Award for Student of the Year 2. As #BoycottFilmfareAwards trends on social media, Salman Khan fans are sharing an old video of the superstar. Filmfare Awards 2020: Kesari Lyricist Manoj Muntashir Upset After Losing to Gully Boy, Vows Not to Attend Any Awards Show (View Tweet).

In the above video, Salman is heard saying, "I think the people who don't have confidence in themselves want awards. I won't go up and pick Filmfare or any stupid award. National Award mile toh that's prestigious. That I'll go and pick. Magazine that is running on our strength. Ke aapke interview pe aur stars ke interview pe jo magazine chal rahi hai wohi aapko bulate hai aur bolte hai ki they're going to give you an award. You come and perform. Then they send it to Pan Parag and Manikchand and we are like idiots.. suit-boot pehen ke baithe hai aur award le rahe hai!"

Salman in the above video may have been pretty pissed with award shows, and with him dropping 'Manikchand' in his rant, and mentioning 'magazine', he is clearly taking a potshot at Filmfare awards, which were once sponsored by the pan masala company. But that hasn't stopped Salman from performing at the awards ceremonies. Filmfare himself has nominated the actor for 16 acting nominations, winning two - Best Debut (Maine Pyar Kiya) and Best Supporting Actor (Kuch Kuch Hota Hai).

(The above story first appeared on LatestLY on Feb 17, 2020 04:11 PM IST. For more news and updates on politics, world, sports, entertainment and lifestyle, log on to our website latestly.com).