Rapper Badshah on Tuesday denied allegations that he used folk artiste Ratan Kahar's lyrics in his track 'Genda Phool' without credits, saying he could not find the lyricist's name anywhere in the records. 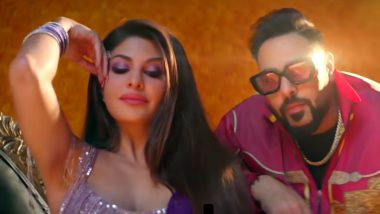 Mumbai, Mar 31: Rapper Badshah on Tuesday denied allegations that he used folk artiste Ratan Kahar's lyrics in his track 'Genda Phool' without credits, saying he could not find the lyricist's name anywhere in the records. The music video, starring Jacqueline Fernandez, is among the top trends on YouTube but a section of social media users has pointed out how the song does not mention Kahar's name. Taking to Instagram, Badshah said as an artiste, he would never rob another of his credit. He mentions the lyrics as 'Bengali folk' as Kahar's name was nowhere in the records. Genda Phool: Twitterati Demand Credit for Original Bengali Songwriter in This Jacqueline Fernandez and Badshah’s Hit Song (View Tweets).

"It took us time to speak to you because we were trying to find his name in the records. But then a lot of people started tagging me. There is a documentary on him, in which he mentions that he has written this song. To me, as per the records, it is a Bengali folk song," the singer said. Badshah said the term folk implies a song of the people. "I am sure he is a great artiste... It is such a beautiful composition and piece of music and I just wanted to sample it in a song and I wanted the whole world to listen to it. Jacqueline Fernandez Is Sultry, Saucy and Beautifully Addictive as the Bengali Bombshell in Badshah’s New Song, Genda Phool!

"Whosoever has tweeted me and all those who made this documentary and his well-wishers, I want you to reach out to Ratan Kahar and tell him that I am here and he can reach out to me, I would love to help him. I have heard he is struggling financially and I want all my friends from the fraternity to support folk artists." The rapper said he would love to help the artiste in "whatever form I can, on the humanitarian, artistic ground". "But as of now, as per records, it's a Bengali folk song. It's not in the records that it's written by Ratan Kahar ji. I have no qualms in helping him. if there was no lockdown, I would have come and met you.

Kahar, who is in his 70s and hails from Birbhum in West Bengal, claimed that he wrote the song but never got any recognition for it. His song has been recreated in the past as well. "The lyrics of this song were written by me and music composition was also mine. But I never got any recognition for the song and it pains me a lot. I am Ratan Kahar, who never got recognised for the song. You judge what kind of justice is that," Kahar said.

The folk artiste appealed to writers and literary personalities to protest against the plagiarism. "There are so many writers and good people around us but nobody protested. Those singing the song don't understand its spirit and ruin its earthiness," he added. Kahar said he first got to know that his song was used in the video after a theatre personality showed the video to him. "I was aghast. Will these things continue?" he asked.