Bollywood's Perfectionist turns a year older today and he is undoubtedly one of the finest actors of the industry, currently committed shooting for his upcoming movie Lal Singh Chaddha in Punjab. The 55-year old might celebrate this with his crew and for all the Aamir Khan fans we have a special feature for the star to pay tribute to his finesse, hard work and capability. 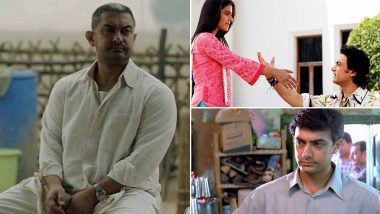 Bollywood's Perfectionist turns a year older today and its a matter of fact that he is one of the finest actors we have in the industry till date. Aamir is currently committed shooting for his upcoming movie Lal Singh Chaddha in Punjab. The 55-year old might celebrate this with his crew and for all the Aamir Khan fans we have a special feature for the star to pay tribute to his finesse, hard work and capability by which he has always entertained us with the memorable performances that we can always endure on a repeat mode. Aamir's last outing Thugs Of Hindustan was a disaster at the BO and the film that also featured Amitabh Bachchan, Katrina Kaif and Fatima Sana Shaikh is surely a nightmare the actor might want to forget. Aamir Khan’s Happy Pictures With Gippy Grewal’s Baby Are Damn Cute!

Aamir made an impressive Bollywood entry with his debut movieYaadon Ki Baaraat directed by Nasir Hussain. There on Aamir gave some great hits like Qayamat Se Qayamat Tak, Dil, Sarfarosh, Mela, Ishq and the list goes on and on. Aamir Khan has big Bollywood blockbusters to his name which includes Rajkumar Hirani's 3 Idiots and PK, Dangal and Dhoom 3. Whether it was Akash Malhotra from Dil Chahta Hai or a rural lad Bhuvan from Lagaan, these characters played by Aamir stays with us and these films are like an old wine that never gets old. On Mr Perfectionist's 55th Birthday, let's take a quick look at 7 of his best dialogues which will be remembered by any Bollywood buff, forever. Aamir Khan and Kareena Kapoor Khan Leave For Laal Singh Chadha Shoot (View Pics) 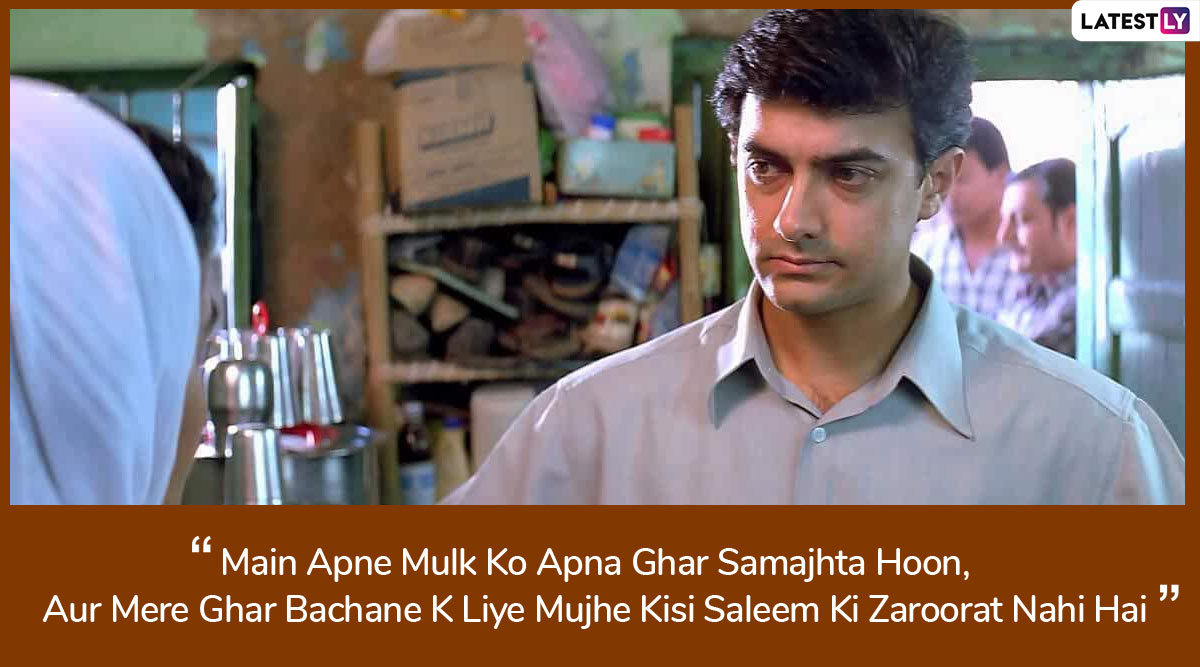 Aamir Khan stepped in the shoes of an IPS Officer Ajay Singh Rathod in John Mathew Matthan's 1999 Film. A film where Aamir played this responsible character with a lot of conviction and every dialogue by the actor was oozing with patriotism. In this scene where he slams a police officer who accuses him of getting a privileged life as a Hindu is one of the unforgettable scenes, you will ever come across. 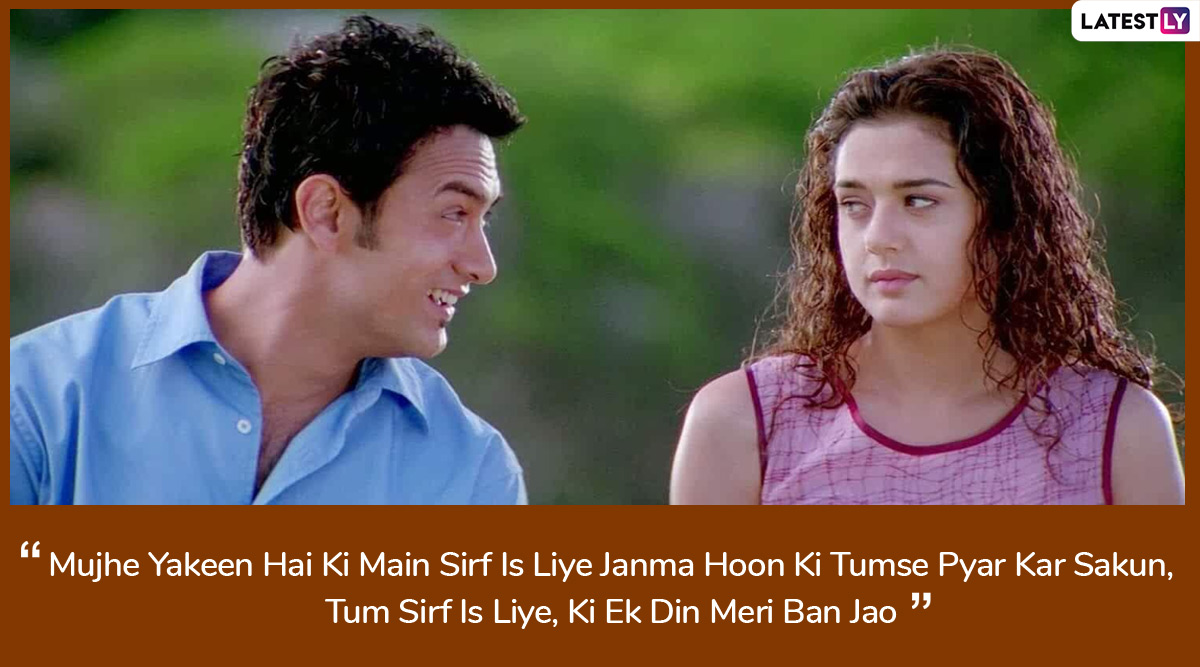 Aamir Khan steals the show as Akash Malhotra sharing wonderful chemistry with Preity Zinta who plays his on-screen love interest Shalini. This Farhan Akhtar directorial debut got the best out of Aamir and not only he was seen as a notorious caring friend but a true charmer when it comes to Romance. Well, this dialogue is just proof of it, Isn't It? 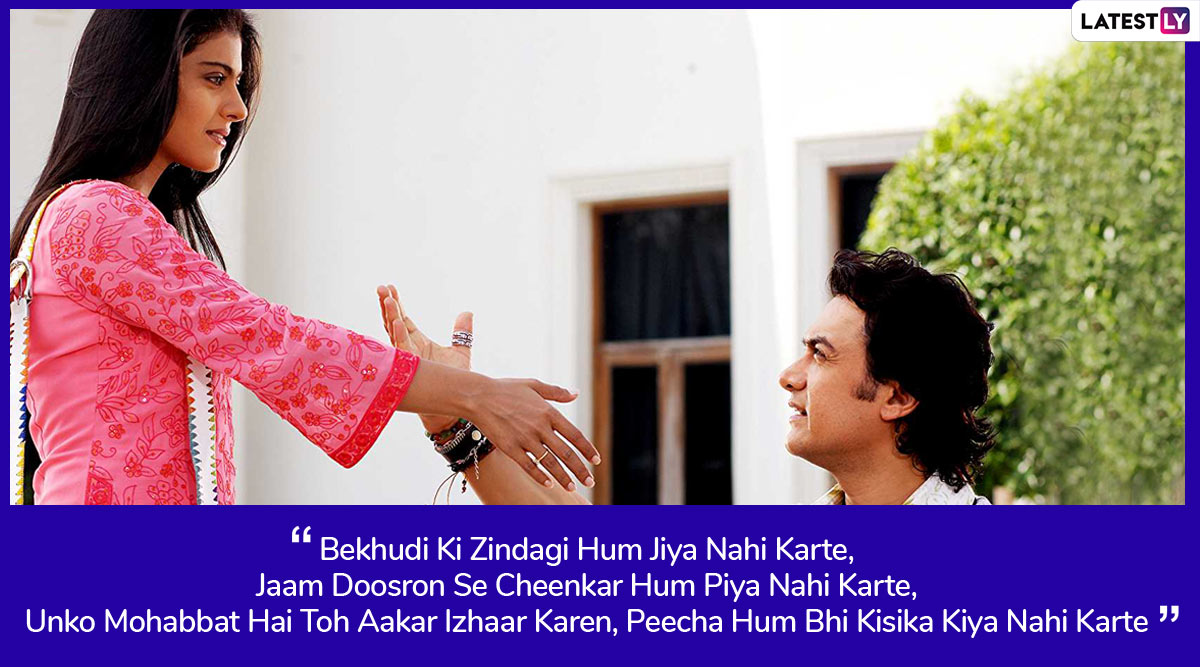 It is the first time we saw Aamir Khan in his 'Shayrana' andaaz and it was Kunal Kohli's 20016 film Fanaa. The film had Aamir playing a dark character named Rehan Qadri. He falls in love with an innocent Indian blind woman played by Kajol and these romantic lines by Aamir can be handpicked as some interesting pickup lines that can be used on someone gracefully. 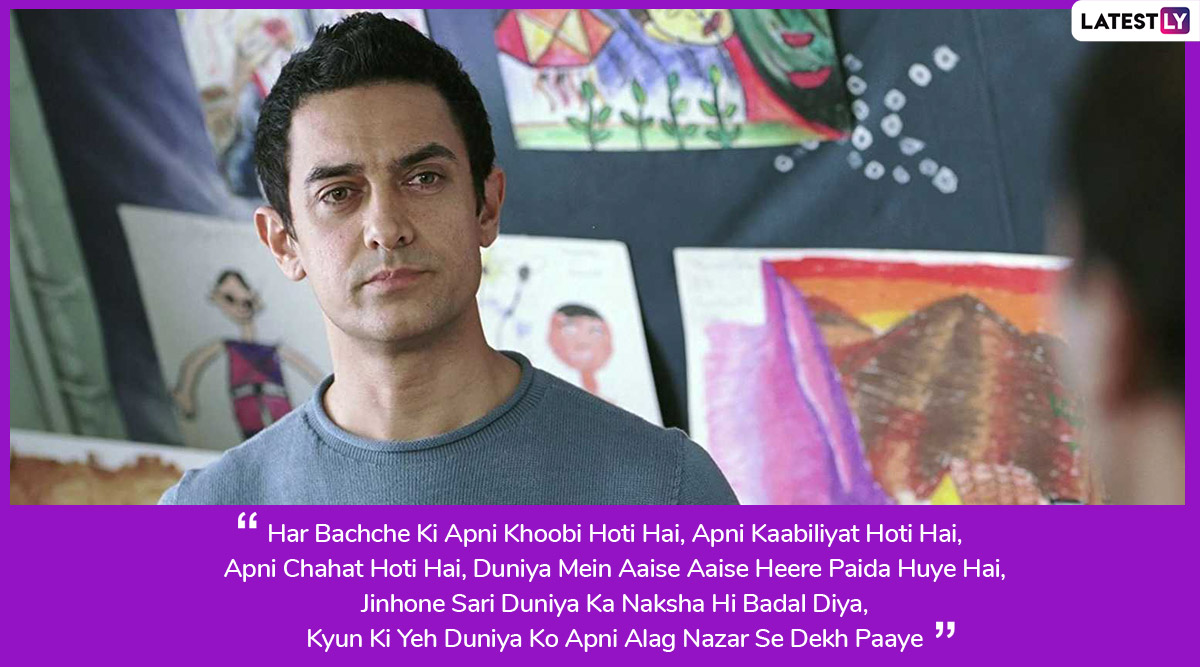 Aamir Khan's directorial debut Taare Zameen Par had him playing a pivotal role of a school teacher Ram Shankar Nikumbh. The film was about a dyslexic kid Ishaan Awasthi played by Darsheel Safary who is sent at a boys hostel due to his worst performance in the academics. Aamir plays an inspiring teacher who helps Ishaan in finding his strengths and the impact of this dialogue is surely the moment of the film to say the least. 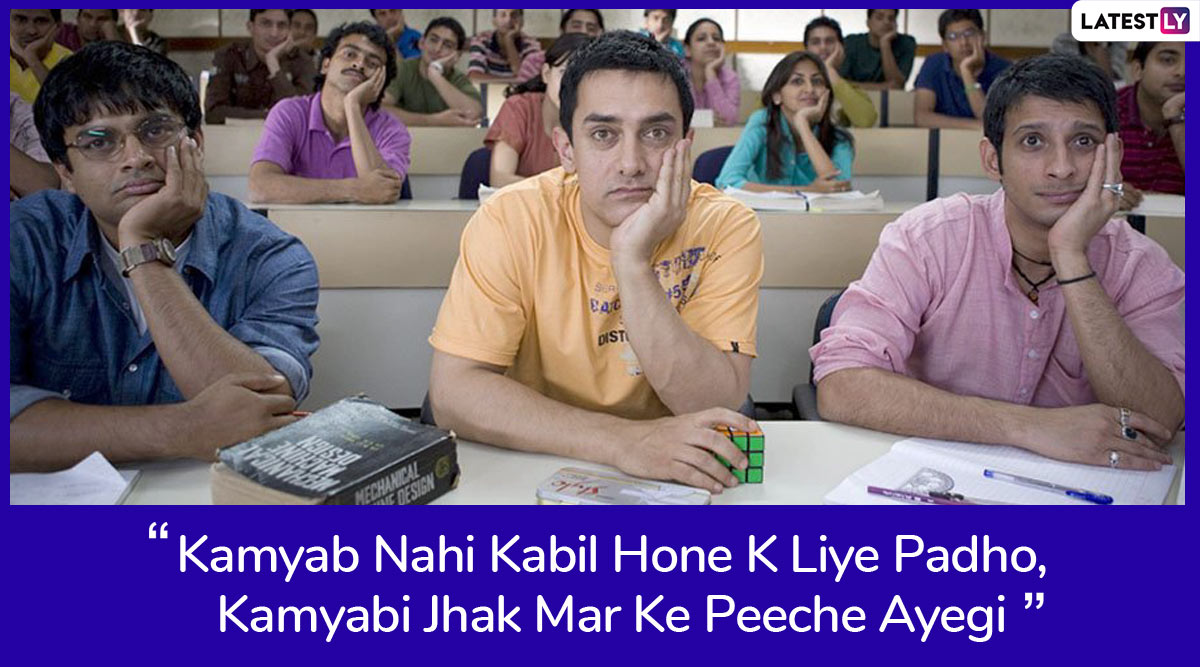 Who can ever forget Aamir Khan's Blockbuster hit 3 Idiots, a film where his character Ranchoddas Chacchad or say Phunsukh Wangdu got him Accolades by the moviegoers for such a praise-worthy performance. Aamir's geek character is so relatable to those engineering and medical students even today and this catchy dialogue is one of his best for sure. "Kamyab Nahi Kabil Hone K Liye Padho, Kamyabi Jhak Mar Ke Peeche Ayegi" 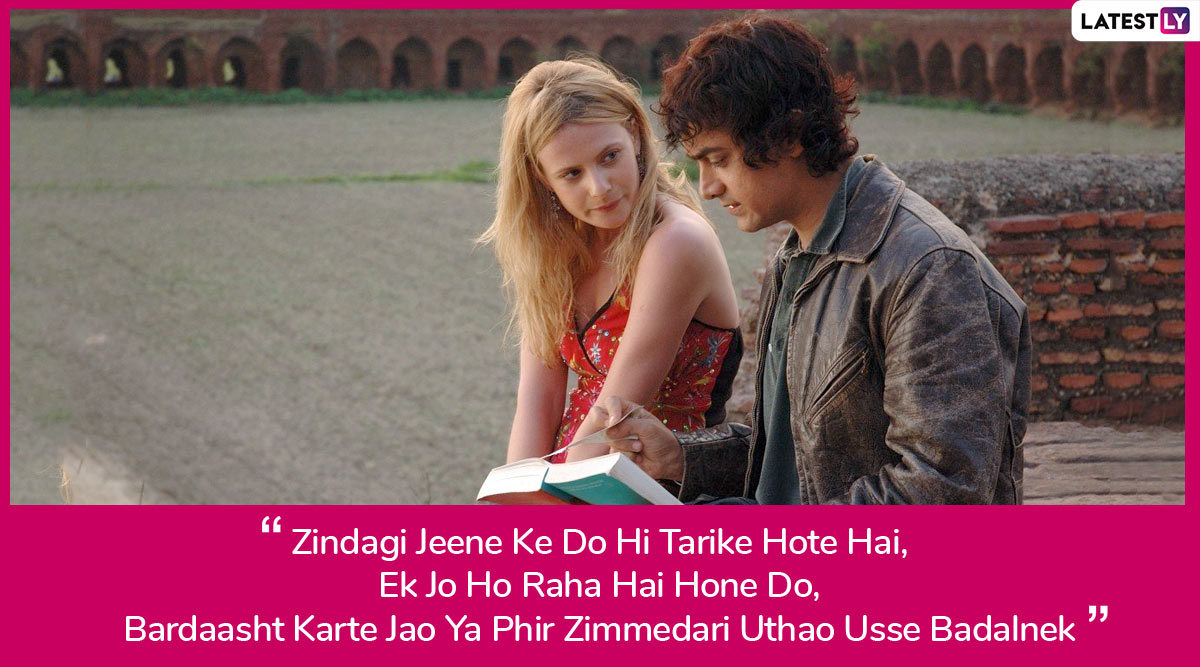 Rakeysh Omprakash Mehra's 2006 hit Rang De Basanti that had Aamir Khan leading an ensemble cast of Siddharth Narayan, Atul Kulkarni, Kunal Kapoor, Soha Ali Khan, Sharman Joshi, Alice Patten and Madhavan. The film that celebrates freedom had this wonderful dialogue is surely a wake-up call for this generation. A film that every youngster needs to watch once! 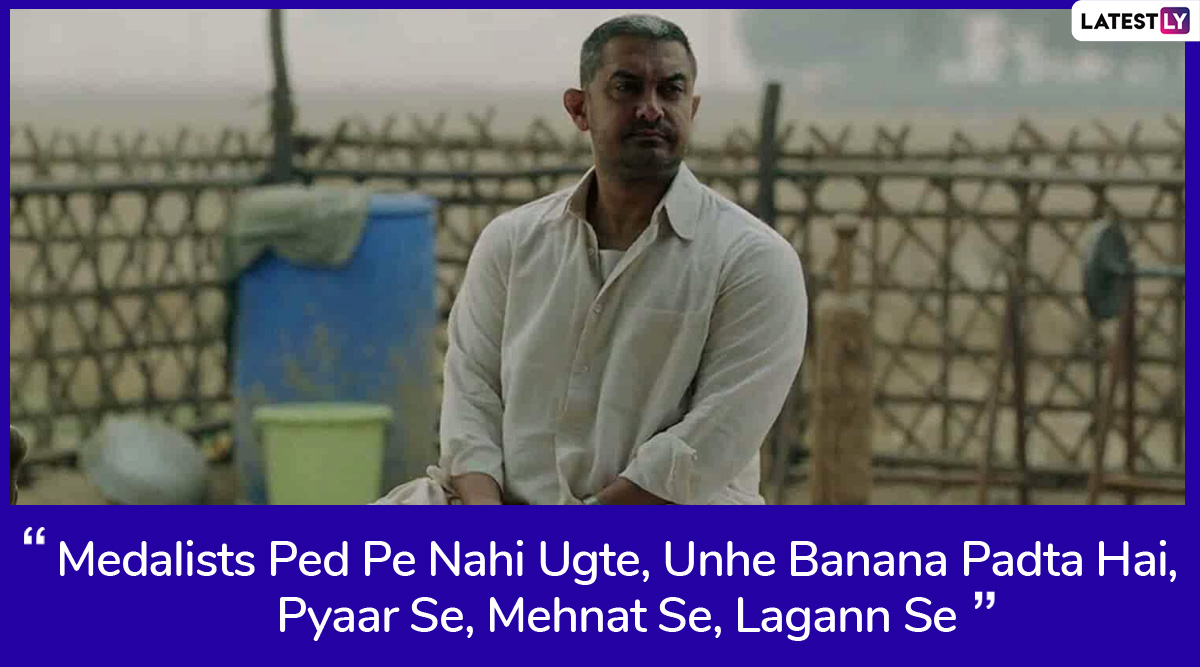 Aamir Khan's Blockbuster hit Dangal that crossed 1200 crore in China and raked in Rs 387 crore lifetime collection in India itself is an unbreakable record. The reason is a stellar Aamir Khan performance as he played  Mahavir Singh Phogat on-screen who trains her daughters Geeta and Babita Phogat in his old-school way. The film is known for Aamir's unbelievable transformation as he plays a fit athletic wrestler and an old 60-year old veteran wrestler, both in one film. This dialogue that promotes women empowerment in Sports is surely one of Khan's iconic dialogue that will be remembered for years to come.

On your Birthday we thank you for your mesmerizing performances that came out of your sheer dedication and hard work, we wish you a Happy Birthday Aamir! and keep rocking the box-office your upcoming films. Eagerly waiting for your next, Lal Singh Chaddha.

(The above story first appeared on LatestLY on Mar 14, 2020 09:04 AM IST. For more news and updates on politics, world, sports, entertainment and lifestyle, log on to our website latestly.com).