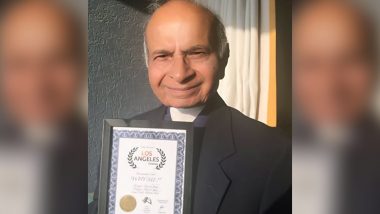 Veteran Bollywood filmmaker Harish Shah, the man behind films like Mere Jeevan Saathi (1972), Ram Tere Kitne Nam (1985), Kaala Sona (1975) and Jaal: The Trap (2003), passed away on July 07, 2020 in Mumbai. The filmmaker was battling throat cancer for a long time now and breathed his last today. He was 76 at the time of his death. His brother Vinod Shah confirmed the news to indianexpress.com. Saroj Khan, Veteran Bollywood Choreographer, Dies of Cardiac Arrest at 71.

Vinod told the portal, "Harish was battling throat cancer for ten years. He passed away today at 6 am. He was 76 years old. His funeral will take place today around 1 pm at Pawan Hans crematorium. Because of the coronavirus pandemic, very few people are allowed for the funeral. It is going to be only 2 or 3 of us to do his last rites." Ennio Morricone, Oscar-Winning Italian Music Composer, Dies At 91.

Even though Jaal.... was Harish's last film on the big screen, he had also made a short film on the very disease he was battling. Titled Why Me, the short film was based on cancer.

2020 has claimed many lives in the entertainment fraternity- TV, Bollywood and Hollywood alike. Bollywood itself lost shining stars in the name of Irrfan Khan, Rishi Kapoor, Wajid Khan, Sushant Singh Rajput and Saroj Khan among others. Our condolences and prayers are with Harish's family and may his soul rest in peace!

(The above story first appeared on LatestLY on Jul 07, 2020 01:44 PM IST. For more news and updates on politics, world, sports, entertainment and lifestyle, log on to our website latestly.com).