Is Rocketry a ‘Shah Rukh Khan Movie’ and Antim a ‘Salman Khan Movie’? Our Take on the Hot Fan-War on Twitter Over the Movies’ Box Office Performances!

Is it right to blame Shah Rukh Khan for the box office failure of Rocketry? Should Antim be called a Salman Khan movie? Here's our thoughts on the whole Twitter debate. 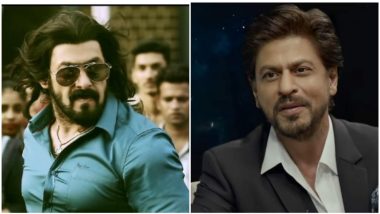 There is a major fan war going on between Shah Rukh Khan fans and Salman Khan fans right now post Rocketry: The Nambi Effect. R Madhavan's directorial debut, where he plays the role of former ISRO Nambi Narayanan, has Shah Rukh Khan in a cameo role where he plays himself. This is SRK's comeback to the big screen after a gap of four years (his last film was Zero which came out in 2018). While Rocketry has been getting mixed to positive reviews from critics, its box office performance is underwhelming but showing slight increase. Rocketry - The Nambi Effect Movie Review: R Madhavan as Nambi Narayanan Excels Over Maddy the Director; Shah Rukh Khan is Charming in an Effective Cameo.

Which is precisely what has become the new bone of contention between the perennially warring fan clubs of Salman Khan and Shah Rukh Khan. Bhai fans are trolling King Khan for the apparent box office 'failure' of Rocketry claiming that if Antim - The Final Truth's poor box office can be blamed on Salman Khan, so why not Rocketry's on SRK?

Check Out Some Such Tweets:

Salman Khan’s Extended Cameo in Antim helped it a lot, despite having a clash and the ATP being less, it opened to around 4.79 crore on Day 1.

While in Rocketry, SRK has an extended cameo and it opened to 63L despite having a Solo Release with Higher ATP. pic.twitter.com/33sh8CUe6e

Antim, which had Salman Khan backing it, opened to 4.78 crore

Secret Superstar, which had Aamir Khan opened to 4.77 crore

And, with much Higher ATP, Rocketry with Retired SRKs cameo opened to 65L.

Of course, Shah Rukh Khan fans came to counteract them with their parallels and figures.

SRK days of shoot for Rocketry - 1

Salman days of shoot for Antim - 50

So is it right to compare the box office performance of Rocketry and Antim in terms of Shah Rukh Khan and Salman Khan's box office pull? Let's analyse each film accordingly and determine what is true and what's not.

Antim was a gangster drama, which was directed by Mahesh Manjrekar and had released in November 26, 2021. A remake of the Marathi film Mulshi Pattern, the movie had Aayush Sharma play the role of a gangster and Salman Khan as a trigger-happy cop. Releasing at the time when the theatres were just coming out of the post COVID-19 second phase lull, Antim only managed Rs 39 crore in India, which is the lowest box office collection for a Salman Khan movie since London Dreams in 2009! Antim Box Office: Salman Khan Scores His Lowest Opening Weekend Collection in 12 Years - Here's What Happened!

But is Antim really a Salman Khan movie? Those who watched Mulshi Pattern know that the film is ideally about Aayush Sharma's character with Salman Khan's role supposedly a supporting role. However, that's not the case entirely with Antim. While the remake is still the story of Aayush Sharma's Rahulya showcasing his rise from a poor farmer's son to a dreaded gangster to his downfall and ultimately demise, Salman Khan's role of Inspector Rajveer Singh Sandhu is elevated to being a parallel lead with nearly equal runtime.

Watch the Trailer of Antim:

Not sure if it was always the plan, but certain reports claim that Salman's role was expanded from an guest appearance to co-lead to increase the movie's box office pull. He has a proper intro scene (even before Aayush's character is shown), has quite a few action scenes though no romantic interest. Even if you disregard the rumours, Antim had been promoted entirely on Salman Khan's star power, be it in the posters where he is in the foreground to even the trailers. Salman Khan has also gone all out to promote the movie at various events and shows.

Why, when Salman Khan was asked by TOI, pre-release of Antim, whether his role was a cameo, he had said, "Everyone is saying this is Aayush's film. Aayush is in the film, but 'picture Paji ki hi hai' (the film belongs to the sardar)" (Salman's cop was a Sikh). He even said this about his role, "There are all those facets of (my on-screen persona) but it is finally what the director wanted. It is larger than life film, but more realistic. Here, there is a certain type of character. You have all the dialogues, but it is just that this character looked best alone so we didn't have anyone with him. The only place where he has danced is on "Bhai Ka Birthday".” Antim Movie Review: Salman Khan’s Attempt To Take a Backseat for Aayush Sharma Proves Futile in This Tiring Vaastav Revisit.

So even when Antim wasn't supposed to be a Salman Khan movie, it was made to be so, and therefore Bhai has to bear the burden of the movie's box office failure. Though, Antim was different from Salman's other masala entertainers and it came out at a very dull time, therefore it can't be compared to the box office performances of his other films, when his previous 'flops' like Race 3, Tubelight and Dabangg 3 went on to make more than Rs 100 crore at the box office!

R Madhavan's directorial debut was delayed due to COVID-19 and finally saw release on July 1. A trilingual made in three languages, Rocketry has only made Rs 3.67 crore. This was Shah Rukh Khan's comeback to the big screen in four years, but is it right to blame the underperformance of the movie on the superstar?

Let's state the facts here. Shah Rukh Khan's role in the film is nothing more than a guest appearance  - Suriya did the same role in Tamil version - with the screentime between 10-15 minutes. Rocketry is an out and out R Madhavan movie, and the film has also been promoted in that manner. Shah Rukh Khan's presence was revealed for a brief moment in the first trailer, but apart from that, King Khan has stayed away from the promotions of the film. As per reports, SRK took on the role as a return favour to R Madhavan, who had a supporting role in Zero.

Watch the Trailer of Rocketry:

Shah Rukh Khan's cameo has won him appreciation from critics, especially his performance in the final act. However, it is not right to call Rocketry a 'Shah Rukh Khan' movie, as it would put enough shade on R Madhavan - who is both the lead actor and director. It is like saying Salman Khan has to share the blame for failures of Zero and Ishkq in Paris, or SRK needs to share the burden of failure of Tubelight. Therefore it is hardly right to compare his cameo with a parallel lead performance of Salman in Antim, when even the promotions underplayed his presence save for headlines about Rocketry in entertainment portals that use SRK for SEO purposes.

That said, SRK has a terrible record when it comes to cameos. Most of the films where he had a guest appearance had tanked at the box office, save for Har Dil Jo Pyar Karega (average) and Heyy Baby (hit). That's a conversation for another day! Is Shah Rukh Khan a ‘Lucky Charm’ When It Comes to Cameos? The Answer Is, Sadly, NO, and We Have Proof!

Final thoughts, though, for the fans of both superstars. Why the need to indulge in such trivial fan wars and end up spreading hate on an already toxic platform, when your idols are such good friends in real life? Salman Khan is making a cameo in Pathaan, and SRK likewise in Tiger 3, with reports that they may play co-leads in the crossover movie by YRF. So isn't this time to come together and celebrate their collaborations instead of indulging in useless banters?

(The above story first appeared on LatestLY on Jul 06, 2022 04:10 PM IST. For more news and updates on politics, world, sports, entertainment and lifestyle, log on to our website latestly.com).