Rocketry: The Nambi Effect is a biopic of former ISRO scientist Nambi Narayanan and is written and directed by R Madhavan. Madhavan and Simran play the leads, while Shah Rukh Khan and Suriya have cameos in the Hindi and Tamil versions respectively. 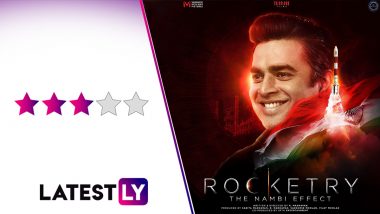 Of course, it is revealed by now that Shah Rukh Khan is returning to the big screen with a cameo in Rocketry. Tamil Superstar Suriya plays the same role in the Tamil version, but since I saw the Hindi one, I would discuss SRK here. So SRK plays himself in the movie, and he is seen interviewing Nambi Narayanan in 2014 a year after India's successful Mars mission launch.

While the chat show crew are annoyed about this last-minute interview hampering their plans and SRK is miffed with Nambi for the sass latter is throwing, they end up in tears by the time Nambi Narayanan narrates his tale after two hours or so. Do I, as a viewer, also feel moved by his story? As a matter of fact, I did. But more on that ahead.

Nambi Narayanan's story, apart from the narration portions, is divided into four chapters - his early days when he left ISRO to study at Princeton about liquid fuels, being sent by ISRO to France to study their rocket technology, a risky but heroic deal with the Russians right during the collapse of Soviet Union, and then of course, the whole 'espionage' scandal in 1994 that doomed his career.

The first half of Rocketry: The Nambi Effect deals with the first two chapters. While they do give insights into Narayanan's professional life including his camaraderie with the late Dr Vikram Sarabhai and DR APJ Abdul Kalam, these portions don't offer much in terms of pace and engagement. The plentiful use of jargon isn't easy to decipher, unless you have the technical background; while though I do admire the film's commitment to spell out way too easy for the viewers, but not so much for the dollops of exposition being dropped. I do feel that Rocketry would have worked better if it started itself from the French chapter, because that would make the movie's runtime sharper, especially as it lead to a very nice pre-interval punch which shows the first major victory for Nambi as a rocket scientist. Madhavan as a director stumbles in these portions to present a more engaging affair.

In between there is also a minor interlude about Nambi trying to convince a British couple to transfer technology, It could have been an interesting scene, if it was not for some very forced awkward sentimentalism of one of British characters, lamenting about partitioning India. A weird case of white-wishing the 'white' slavers. Even in the Princeton scene, when Nambi jokes about Indians being the best workers to an American professor, it feels as a pandering to the goras.

It is from the pre-interval portions that Rocketry gets its combustion engine fired up (literally at that) and running well. The Russian sequence is thrilling, if not polished enough (Madhavan's lack of prowess as a director is evident here), and once it gets into the portion we are eager to listen to - the whole 'espionage' saga'  - is where Rocketry truly comes to its own and totally draws you in. Again the treatment is average - I am unsure why Madhavan would opt for a 4:3 aspect ratio in certain scenes (is it to show how he is being trapped?) - but the emotions and the performances truly shine here. Nambi Narayanan's confused and betrayed feelings are felt throughout, as the scientist is absolutely clueless of what is happening here, andwe feel the stinging of the slaps being pelted on him. R Madhavan puts his best foot here, both as an actor and a storyteller, as he decides to let the sentiments work their effect on the viewer than going for a more attractive packaging.

Certain scenes do hit you strong. Like, the scene where Nambi returns to his home after his imprisonment and meets his wife. Her reaction to his arrival left me terrified. Simran Bagga, who had not much to do for the majority of the film other than representing the dutiful wife, is harrowing in this scene. So also is that Mashaal-inspired scene where Nambi and his wife are thrown out of an auto (interestingly named 'Sundari', which Mallu movie fans might remember as the name of Mohanlal's auto in Aey Auto) during heavy rainpour.

Even the scene where Nambi meets an old colleague, whom he did wrong once, at the police station is highly effective (Sam Mohan who plays the character Unni is a standout). These sequences may be seeped in melodrama, but they are well performed and well-worked out. But the sequence that left my eyes moist happens when Nambi hears about his SC acquittal. His embracing of his wife and promising her to be a better husband, while being thronged by newly-turned admirers is Madhavan bringing the best of himself both as an actor and a director.

Even the scene that follows, of Shah Rukh Khan sharing the empathy for what Nambi Narayanan had gone through is touching. The superstar, who had been a charming narrator till then, is stirring in this scene, reminding me of his underrated act in the climax of Billu. Shah Rukh Khan In Rocketry The Nambi Effect: All You Need To Know About SRK’s ‘20 Minute’ Cameo In R Madhavan’s Film.

Annoyingly, the sequence after that once again reminds you that Madhavan is still a rookie director. Some SPOILERS ahead so be careful. In that sequence, Madhavan's older Nambi (makeup is done well BTW) turns to the real Nambi Narayanan and SRK is apologising to him on behalf of the nation. The idea is cool, and there is a sense of irony when Mr Narayanan says to Khan that he is going to fight for those whose patriotism keeps being questioned by devious factions. Considering that Shah Rukh Khan himself has seen his patriotism being questioned incessantly by RW political factions because he is Muslim, you can't help but shake your head there. The issue comes when the real Nambi delivers a monologue and it feels clumsily performed and edited, with SRK's expressions looking repetitive, and even the onlookers are seen repeating their gestures.

You cannot also ignore the irony when the film ends with the present PM giving a speech lauding the scientists of ISRO, when in real life, his followers are accused of promoting pseudo-science over actual scientific progress. That the movie arrives the week where a social activist and a eminent fact-checker have been arrested on flimsy grounds is merely the icing on the cake called Irony.

Rocketry also fails on its promise of revealing who was the real culprit behind Nambi's misfortunes. The dice falls on a character we see earlier in the film, but I feel that Madhavan has stopped himself short of creating a major political scandal with any shocking revelation. In fact, Nambi Narayanan's Wiki page is far more outspoken about this than the movie.

- The Emotionally Impactful Second Half

- The Slow-Paced First Half

- The Epilogue Could Have Been Done Better

Throughout Rocketry, I cannot miss the passion in which R Madhavan wants to tell the story of one of this country's most wronged individuals. While the craftsmanship is not exactly on par, the actor's heartfelt performance and his dedicated conviction to tell the admirable highs and harrowing lows of Nambi Narayanan deserve some lovely brownie points.

(The above story first appeared on LatestLY on Jul 01, 2022 10:31 AM IST. For more news and updates on politics, world, sports, entertainment and lifestyle, log on to our website latestly.com).