Either Karthik Subbaraj peaked too soon or the law of averages caught up with him, for Mercury is his weakest movie till date. 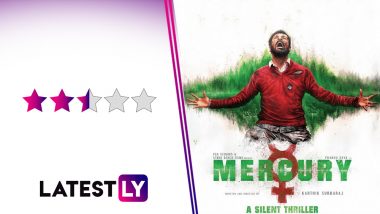 If I had to nitpick about my favourite Tamil directors, the very talented Karthik Subbaraj will definitely be there in my top five list. Be it his Pizza or Jigarthanda or even the divisive Iraivi, there is a lot to discuss and delight for a cinephile in his movies. So when he decides to make a silent thriller with Prabhu Deva in the lead, naturally I am excited. Mercury needs to be applauded for its experimentation, since it is so difficult to make a silent movie these days. But experimentation itself doesn't make good cinema, right? Ah…anyway, here is my review of Mercury,

A group of five youngsters, four boys and a girl, is at a quaint village for their alumni meet. The village has been a tragic scene of mercury poisoning years ago. Later that night, these friends go on a late-night ride that ends up with terrible consequences for all of them. And here enters a zombified Prabhu Deva!

We rarely make silent movies and to make it a thriller is not something we usually get to see on a Friday. At the behest of the makers, I am not divulging further details about the plot. But I have to say this - if you have seen several Hollywood slasher flicks, you can point out the inspirations. For me, it ended up being The Tribe (2014 Ukrainian movie) meets I Know What You Did Last Summer meets Don't Breathe.

Well, there is nothing wrong with inspirations, as Karthik's previous works also paid tribute to other movies. All the director needs to do to acquit himself is by giving an original treatment to the movie. In the case of Mercury, Karthik has done that to a larger extent, but the references feel too heavy-handed to be ignored. However, the idea of make your protagonists hearing-impaired and facing them against an indestructible monster is surely intriguing. Using silence to terrorise you is something even last week's A Quiet Place did as well, but unlike the Hollywood movie, Mercury is completely dialogue-less.

To Subbaraj's credit, the buildup of the plot is fantastic. Without resorting to subtitles, he makes the viewers familiarise with how the friends communicate with each other. Many of the gestures may go over the head, but after one point, you get the gist. Special mention must be given to all the five newcomers - Sananth Reddy, Deepak Paramesh, Shashank Purushotham, Anish Padmanabhan and Indhuja - who are fantastic in their roles. They are brilliant actors who deserve to be seen in more movies. The first half spends in letting us know more about this group before bringing in the twist. The movie, till then, relies on atmospheric scares and terrific sound design, not to mention a brilliant background score. The interval scare is well-done. So far so good!

However, post-interval, when the movie lets out a maniac Prabhu Deva on these hapless youngsters is where the plot falls apart, scrap by scrap. The movie loses its horror quotient to become more of a cat-and-mouse thriller. The major fault, I believe, lies with both Prabhu Deva's casting and character. Being the only starry name in the movie (save for a cameo in the end), Prabhu Deva's casting feels more gimmicky rather than scare-effective. Prabhu Deva is not known for his histrionics, and he is no great shakes here either (with too much grunting and yelling), so I really don't get why the makers went for this casting. Also I have no clue what he is supposed to be playing here, a zombie or a spirit, as his actions often contradict with themselves. Also an important character goes missing for long, with no proper explanation given, only to appear later.

But then the movie is still saved by the performances of the lead actors and the technical aspects. There are two terrific sequences in the second half, which showcases the brilliance of the director as well as the sound designer. One involves a ten-minute long sequence that reveals the entity's weakness and the second involves a broken musical watch. However, soon after the second sequence, Mercury falters again leading to a tepid climax, involving some quite unnecessary emotional melodrama. These sequences undo whatever little good Subbaraj has done before and leave you with a sour aftertaste. Also there was no need to 'explain' certain happenings as it was quite clear during the turn of events. Even the whole mercury poisoning subplot felt like a forced after-thought that had little to do with the main plot.

- The concept and its unique treatment

- Performances of the newcomers

- A good buildup in the first half

- Quite a few well-executed sequences

- Overall use of sound.

- A weak second half with a weaker conclusion

- Too much inspired in its references

Either Karthik Subbaraj peaked too soon or the law of averages caught up with him, for Mercury is his weakest movie till date. It has to be applauded for its gutsy experimentation, technical finesse and performances. Overall, however, Mercury falls quite short of being a game-changer in the genre, unlike Kamal Haasan's Pushpak - a movie it paid tribute to in the opening credits. Let's hope this is just a one-off case for Subbaraj and that he comes back in full force with his next (starring none other than Rajinikanth!)

(The above story first appeared on LatestLY on Apr 11, 2018 08:18 PM IST. For more news and updates on politics, world, sports, entertainment and lifestyle, log on to our website latestly.com).