Directed by the supremely talented Karthik Subbaraj (Pizza, Jigarthanda), Mercury is a silent horror-thriller that has Prabhu Deva in a negative role as some sort of a zombie entity. 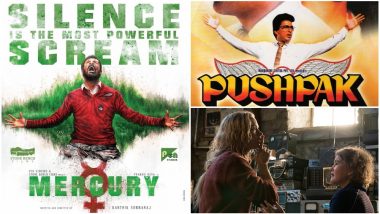 If you are not excited after watching that thrilling teaser of Prabhu Deva's upcoming movie, Mercury, perhaps you don't like different cinema at all. Directed by the supremely talented Karthik Subbaraj (Pizza, Jigarthanda), Mercury is a silent horror-thriller that has Prabhu Deva in a negative role as some sort of a zombie entity. The reason the movie wants its characters to go silent, is like the tagline says 'Silence is the most powerful scream' - any sound might attract the wrath of the monster.

Mercury looks like an original movie, and knowing the director's previous works, I have no doubt about that. There might be influences of other movies, but the treatment and the premise would definitely be original.

That said, we can't help but think about these five below movies after having watched the teaser because of its concept, the plot and the genre.

India's most famous and critically acclaimed dialogue-less movie, starring the great Kamal Haasan, is also one of the best comedies ever made. Pushpak/ Pushpaka Vimana is a timeless classic, that deserves to be watched to learn how a rivetting movie can be made without the support of dialogues, while also giving us the most memorable assassin in form of the character played by Tinnu Anand. Definitely playing tribute to Charlie Chaplin's cinema, this Singeetam Srinivasa Rao is a must watch if you haven't watched it already.

Hush is an underrated 2016 horror movie that is about a deaf-and-mute author who is stalked in her home by a masked serial killer. Since the protagonist can't speak, there are vast expanses in the movie that are without dialogue. But that doesn't stop it from being one of the most gripping thrillers made in recent times.

This more popular thriller may not have ghost, but it has a blind man as the antagonist who shows no mercy to three intruders unlucky enough to break into his house. As he relied on sound and smell to catch his victims, the poor thieves have to do everything to make sure they don't utter any sound. And the ones who do, they are in no condition to speak! Scary and thrilling, Don't Breathe will keep you on the edge of your seats.

Mercury sets its premise in a town where its inhabitants had died of mercury poisoning. It remind me of this 1979 movie about this an environmental agent and his wife who are terrorised by bears, who have become mutants thanks to mercury poisoning.

The Office fame John Krasinski directs and stars in this upcoming horror movie, that also has his real-life spouse and Oscar nominee Emily Blunt in the lead. The movie boasts of a unusual premise of a family who can't utter a word or make a sound thanks to mysterious creatures that hunt by sound. Intriguing, isn't it?

(The above story first appeared on LatestLY on Mar 07, 2018 07:33 PM IST. For more news and updates on politics, world, sports, entertainment and lifestyle, log on to our website latestly.com).