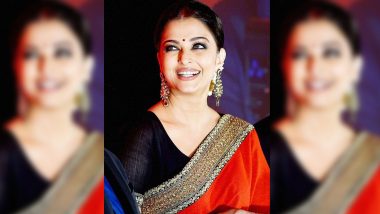 Aishwarya Rai Bachchan was last seen in the Hindi film Fanney Khan and it had opened to mixed response from critics, also, it didn’t mint well in terms of box office collection. The actress has two intriguing projects in her kitty – Mani Ratnam’s Ponniyin Selvan and Pradeep Sarkar’s Noti Binodini. Talking about the latter, Aishwarya would be seen playing the role of Binodini Dasi, a courtesan-turned-theatre actor. Owing to the coronavirus pandemic, shooting of several films have been delayed and now Noti Binodini is also in the list. Ponniyin Selvan: Aishwarya Rai Bachchan to Play the Antagonist in Mani Ratnam’s Magnum Opus?

According to latest reports, the makers of Noti Binodini has pushed back the shooting of this Aishwarya Rai Bachchan starrer. As per a report in Mid-Day, Noti Binodini is expected to go on floors after March 2021. About it Pradeep Sarkar was quoted as saying, “The writing is in progress. While Aishwarya has given her nod, I have not approached other actors because I am waiting for the crisis to (abate). I hope the vaccine is developed by March so that we can start shooting.” Aishwarya Rai Bachchan Posts a Gratitude Note For Fans Who Prayed For Her and Family During COVID-19 Treatment.

Let’s not forget, Aishwarya Rai Bachchan has recently recovered after she was tested positive for coronavirus. It is important for the makers to safeguard her and the team members’ health. Pradeep Sarkar, who is known to helm films such as Parineeta, Laaga Chunari Mein Daag, Mardaani, among others, had earlier stated that Aishwarya Rai Bachchan was always his ideal choice for this biopic and she had immediately given a nod to do this film on hearing the first narration itself.

(The above story first appeared on LatestLY on Sep 16, 2020 11:59 AM IST. For more news and updates on politics, world, sports, entertainment and lifestyle, log on to our website latestly.com).