Aishwarya Rai Bachchan, one of the beautiful actresses in the world, was last seen in the film, Fanney Khan. Well, she will next been seen in Mani Ratnam’s Ponniyin Selvan, one of the most anticipated projects. 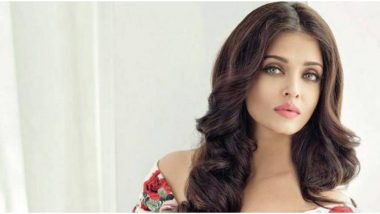 Aishwarya Rai Bachchan, one of the beautiful actresses in the world, was last seen in the film, Fanney Khan. Well, she will next been seen in Mani Ratnam’s Ponniyin Selvan, one of the most anticipated projects. This multi-starrer project has been in buzz since quite a long time and it was just a month ago when the makers released the movie’s first poster. It did not feature any of the actors, but just a sword with the film’s title and a caption that read, ‘beginning of the golden era’. The latest update is on Aishwarya Rai Bachchan’s role in this historical drama. Ponniyin Selvan Movie Poster: Mani Ratnam's Magnum Opus Promises To Be The Beginning Of The Golden Era On Screen.

As per a report in Mirror, Aishwarya Rai Bachchan would be seen playing the role of an antagonist in Ponniyin Selvan. Her character Nandini, is a one who is hungry for power and the one who plots the downfall of the Cholas. The source revealed to the tabloid that most of Aishwarya’s portions are with Chiyaan Vikram, who is playing the role of a prince, Aditya Karikalan. The duo has earlier shared screen space in Raavan. Ponniyin Selvan, an adaptation of Kalki Krishnamurthy’s fictional novel of the same name, says the story of Arulmozhivarman, one of the kings of the Chola dynasty. Was Rajinikanth’s Thalaivar 168 the Reason behind Keerthy Suresh Walking Out Of Mani Ratnam’s Ponniyin Selvan?

Sobhita Dhulipala, who shot to fame for her role in the web series, Made In Heaven, has also been roped in this Mani Ratnam directorial. She would be seen playing a key role in this film, a princess, who is a master of Kuchipudi and Bharatanatyam. For the unversed, Sobhita is trained classical dancer. The film also stars Karthi, Trisha Krishnan, Jayam Ravi among others in the lead. Produced under the banners of Lyca Productions and Madras Talkies, the makers are yet to announce the film’s release date.

(The above story first appeared on LatestLY on Feb 15, 2020 08:30 AM IST. For more news and updates on politics, world, sports, entertainment and lifestyle, log on to our website latestly.com).