Pati Patni Aur Woh Beats Panipat At The Box Office On Day 1, As Per Early Estimates 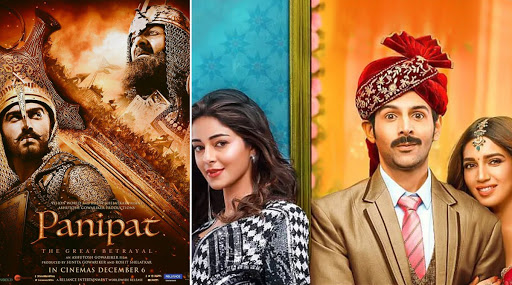 Pati Patni Aur Woh and Panipat are two films that released at the box office yesterday. One is a comedy with extra-marital affair thrown in and the other is the retelling of the third battle of Panipat between the Marathas and the Afghans. If we go by the early reports, the audience seemed to have made their choices. As per Box Office India, Pati Patni Aur Woh has made more than expected on its first day while Panipat has been struggling since its release. Pati Patni Aur Woh Opens With 25-30% Occupancy In The Morning Shows

The estimates suggest that Kartik Aaryan, Bhumi Pednekar and Ananya Panday film earned around Rs 8.5 to 9 crore which is astounding as many Trade experts had predicted a Rs 7 crore opening. This will also become Aaryan's biggest opener and beat Lukka Chuppi. The small-town vibe and the songs seem to have made an impact. A country that celebrates Kabir Singh will definitely lap up this disturbing movie.

As for Panipat, the BOI reports suggest that the film's opening day numbers fall in the range of Rs 3.5-4 crore. That is extremely disappointing as Trade was hopeful the movie will pocket Rs 6 crore on its opening day. This doesn't sit right for the film which is made at a budget of over Rs 100 crore. We hope Saturday and Sunday numbers turn things around for the film.