Piyush believes that under any socio-political change, storytelling becomes more powerful as a medium. However, he emphasised how the tool of storytelling should be used for communication and not manipulation. 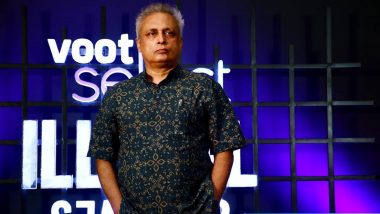 When the film 'Black Friday' was released in 2004, the lyrics of every song of the film gave goosebumps to its audience and it still does. A film like 'Rockstar', 'Tamasha', and 'Pink' is incomplete with the presence of the characters like Dhingra, Kathakar and Prashant Mehra. In the Hindi language theatre circuit, his name is one of the prominent and prestigious ones. And in the very recent time, his presence as Panditji and Janardhan Jaitley for web series 'Matsya Kaand' and 'Illegal 2' are unforgettable. Illegal Season 2 Review: Neha Sharma, Akshay Oberoi and Piyush Mishra’s Legal Drama Series Returns in Fine Form on Voot Select (LatestLY Exclusive).

But, the multi-talented veteran artiste Piyush Mishra says he does not think he is a talented individual, rather he is a chosen one by the Almighty. Piyush told IANS: "You know I did my first play in school when I was in standard 8. My first professional theatre was in 1979 ('Dilli Teri Baat Nirali'). I have a sense of belonging and have a relationship with stage. I therefore never knew what stage-fear is...never felt it ever since a child. When I write, act in theatre, direct plays and every other creative outlet that I have been exploring, I think I am meant for it. I know that many times people praised me for my poetry and every other work that I have done. But I think I am not talented as an artiste, I am gifted, I am the chosen one by Almighty to write 'Arre Ruk Ja Re Bandeh'." Piyush Mishra: The Enthusiasm of Today’s Youngsters Really Impressed Me.

"It is so easy, to tell a powerful story in a manner that can misguide a section of people; because the storyteller might be having a steady following. But, if you are a responsible storyteller, who understands the power of the story, you rather guide or engage people in positive thoughts instead of misleading them. Do you think what I said is quite complex? But storytelling is all about simplicity!" smiled the artiste. Considering the time when the conversation around the religious majority and minority is taking the centre stage in news to cinema everywhere, it was worth going back to the lyrics of the song titled 'Badshah In Jail' from the film 'Black Friday'.

As the song still holds relevance in present times, IANS asked what was his frame of mind when he wrote the song. Piyush replied, "If you are specifically talking about that song, I was not given any special brief to write it. I was just told what the scene is, and the situation. I just wrote it...those first few words just came on a flow when I was brainstorming; I just wrote what I felt, I believe that we read our religious book, but we are only reading text, not the subtext. So I wrote 'Raat hindole pe baitha ek/ Banda rota jhul gaya/ Padhli aaj kuraan magar main / Aayaton ko bhul gaya'." "Tell me which religion encourages violence and killing human beings...none! But the problem is we are not trying to understand the subtext and rather manipulating the real meaning of the scripture to serve our own purpose. That needs to stop! Pyaar se hasil hogi, wo naafrat se kahan?" Piyush signed off.

(The above story first appeared on LatestLY on Nov 30, 2021 11:31 PM IST. For more news and updates on politics, world, sports, entertainment and lifestyle, log on to our website latestly.com).