Piyush Mishra: The Enthusiasm of Today’s Youngsters Really Impressed Me

Piyush Mishra, who is playing a pivotal role in the upcoming web series Matsya Kaand, says the professionalism and enthusiasm of young actors today really impressed him. 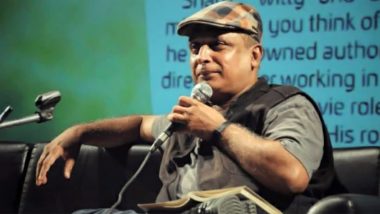 Actor-director and prominent lyricist Piyush Mishra, who is playing a pivotal role in the upcoming web series Matsya Kaand, says the professionalism and enthusiasm of young actors today really impressed him. Piyush earlier worked with actors like Ranbir Kapoor, Ali Zafar, Taapsee Pannu in films like Rockstar, Tere Bin Laden, Pink and also in the latest series with Ravii Dubey. Sitara Devi Biopic: Film on the Life of Legendary Dancer Announced on Her 101st Birth Anniversary.

Saying from his observation Piyush told IANS: "The enthusiasm of today's youngsters really impressed me. I have worked with a couple of them including Ravii now, for our new show and I must say they are so well prepared and always on their toes. Their way of approaching work, their professionalism are so advanced. Also, I have to specially mention Ranbir, I really adore him, such a fine actor he is. Suresh Wadkar: Fortunate to Receive Padma Shri Award Under Modi Ji’s Tenure.

"He is sharp and intuitive at the same time as an actor, which is a great quality of any performing artiste. Among all the directors, I must also mention Imtiaz (Ali) whom I see as a true storyteller. I only have worked with him in two films 'Rockstar' and 'Tamaasha' but 'kaam karke bahut maza aaya tha'..."

'Matsya Kaand' is a show, directed by Ajay Bhuyan - revolves around a conman Matsya played by Ravii in which he appears in 11 different avatars. Sharing more insight into his character in the show, Piyush said, "I am playing a jail inmate who is called 'Pandit ji' by everyone out there. He is one of the very influential characters inside the jail. He is a highly knowledgeable man, well-read, well-informed.

He takes classes on Vedas and Indian mythology in the jail and all the inmates listen to him and follow him. One day, he comes across Matsya and he also helped him to get out of some of the difficult situations and eventually he taught Matsya about how to become a conman!" The show releases on MX Player on November 18.

(The above story first appeared on LatestLY on Nov 08, 2021 09:29 PM IST. For more news and updates on politics, world, sports, entertainment and lifestyle, log on to our website latestly.com).