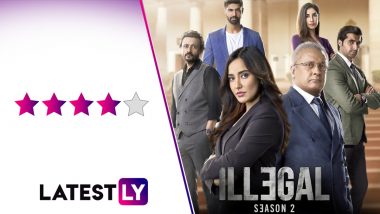 Illegal Season 2 Review: Voot Select has been dropping some pleasant underdogs when it comes to web-series. Shows like Asur, The Raikar Case and Illegal have managed to grab attention when most of us were home-locked during the first wave of pandemic. Now Illegal has returned for a second season, which is directed by Ashwini Chaudhry. The first season was pacy and hard-hitting in places, with some very engaging courtroom drama scenes. The second season ups the ante with even more complicated scenarios for its beautiful. young and clever protagonist, Nihaarika (Neha Sharma), both personally and legally. Illegal Review: Neha Sharma, Piyush Mishra and Akshay Oberoi’s Legal Drama Series Makes for a Compelling Watch.

Nihaarika, after parting ways with JJ (Piyush Mishra), is now heading her own legal firm with the help of Puneet (Satyadeep Mishra). JJ is making his inroads into politics, while his son (and Nihaarika's ex) Akshay Jaitley (Akshay Oberoi) is handling the major cases in their legal firm. With a jagged history behind, Nihaarika and Akshay are often at loggerheads with each other, while JJ continues to pull the strings behind the scenes.

Meanwhile Nihaarika's firm gets a couple of high profile cases that could make them enter the major league. At the same time, Nihaarika gets closer to the dashing Raghav (Tanuj Virwani), the new resident in her building. However, things aren't as straightforward for Nihaarika, as she not only has to defend cases that aren't easy to defend, but also survive attempts on her life.

When we compare this new season to the previous one, there is one thing that we sorely miss is Kubra Sait. Her character's tragic and her performance gave a very strong emotional heft to the first season, something the new season do lack. Apart from that, Illegal season 2 is an otherwise very competently directed, pacy sequences of legal, personal and political maneuvers with plenty of twists and turns. OTT Releases of the Week: Hailee Steinfeld’s Hawkeye on Disney+ Hotstar, Neha Sharma’s Illegal Season 2 on Voot Select, Nushrratt Bharuccha’s Chhorii on Amazon Prime Video and More.

Illegal season 2 does start off on a dicey note, as if it was unsure how to rearrange the chess pieces on the board after the shakeup of the last season's finale. But once it gets the game going, there is no turning back. JJ's sly plays, the mystery around Nihaarika's Damocles sword hanging on her head, not to mention her new complicated cases, manage to keep you arrested to the very end. The courtroom sequences are well-done and packs a punch when needed. Ashwini Chaudhry brings a razor-sharp edge to the proceedings, that along with the decent pacing, makes the episodes worthwhile.

If you have enjoyed the first season of Illegal, the new season feels more improved, sleeker and more impactful in comparison. Illegal season 2 is streaming on Voot Select.

(The above story first appeared on LatestLY on Nov 25, 2021 01:54 PM IST. For more news and updates on politics, world, sports, entertainment and lifestyle, log on to our website latestly.com).