During one scene, while giving herself a pep talk, Gayatri played by Rhea Chakraborty, reminds herself of ArGo. When Vivek, who plays a cop, asks who or what ArGO is. The woman replies that it's short for Arnab Goswami, her idol. 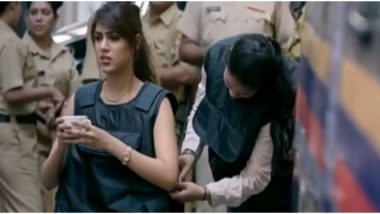 A scene from the film, Bank Chor, is going viral right. We won't blame you if you don't know much about Bank Chor. The movie pretty much flew under the radar when it released but it is entertaining, so we suggest you check it out. The movie featured Riteish Deshmukh, Vivek Oberoi, Vikram Thapa and Rhea Chakraborty. Yes, that last name on the list is the reason why a clip from the film is everywhere on the internet. In the movie, Rhea played the role of a journalist Gayatri Ganguly. She was key to the money heist plot of the film. SSR Case: Rhea Chakraborty and Family Haven’t Received Summons From the CBI, Says Actress’ Lawyer.

During one scene, while giving herself a pep talk, Gayatri reminds herself of ArGo. When Vivek, who plays a cop, asks who or what ArGO is. The woman replies that it's short for Arnab Goswami, her idol.

The Internet can't point out the irony enough. Currently, in the real world, Rhea is fighting a legal battle against the charges of abetment of suicide and money laundering after her boyfriend, Sushant Singh Rajput, died on June 14. Popular journalist Arnab Goswami has developed a keen interest in the case, frequently organising panel discussions and fanning theories about the case. He even joyously celebrated on air when the case was handed over to the CBI. Sushant Singh Rajput Death Probe: Rhea Chakraborty's Lawyer Respects the Supreme Court's Decision, Says She's Ready to Face the CBI Investigation.

Check Out The Scene From Bank Chor Here:

Check Out One Of The Viral Tweets Here:

Come on @Tweet2Rhea, you can do this. Do it for ArGo 😭😭😂 pic.twitter.com/AYRJNpH1tL

Rhea has been questioned by the Mumbai Police and the Enforcement Directorate. ED found no big money transfers from Sushant's accounts into Rhea's as claimed by some unverified reports and conspiracy theories.

(The above story first appeared on LatestLY on Aug 25, 2020 08:39 PM IST. For more news and updates on politics, world, sports, entertainment and lifestyle, log on to our website latestly.com).