In an interview, Saif revealed that he has always managed his time and work and made sure he is there to spend some quality time with all his three kids. 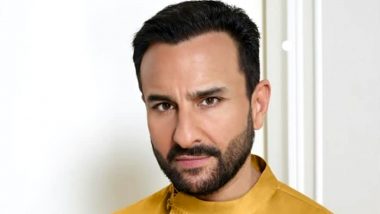 Saif Ali Khan and Kareena Kapoor Khan are all ready to welcome their second baby. The couple made the announcement last year with a cute post and has been sharing the updates about the baby ever since. Mommy Kareena made sure she keeps herself busy during the pregnancy and picked up many projects to work on. Saif Ali Khan too was busy with the shooting of his different projects and promotion of his shows. But now as Kareena's due date is coming near, the actor has decided to take a break. Adipurush: Shooting Of Prabhas And Saif Ali Khan Starrer To Commence From February 2!

Saif Ali Khan plans on to take paternity leave when Kareena and he welcome their second baby. In an interview, Saif revealed that he has always managed his time and work and made sure he is there to spend some quality time with all his three kids. After Sara Ali Khan, Ibrahim Ali Khan and Taimur Ali Khan, he wants to do the same for his fourth baby. He added that he is able to take the leave only because he has the privilege to do so.

Saif told Elle magazine, “Who wants to work when you have a newborn at home! If you don’t see your children growing up, you’re making a mistake. And I can take time off from work—it’s a privileged position. Rather than follow a 9-to-5 routine, I live like an actor. Your dharma and approach to everything are based on your career. I’m an actor and I’m loving it! I like being with my family, travelling the world, drinking wine and watching my kids. Touchwood!” Saif Ali Khan Spends Quality Time With Kareena Kapoor Khan And Taimur After Being Acquitted In The Blackbuck Poaching Case.

Workwise, Saif will commence the shoot for Prabhas starrer Adipurush after the paternity leave. The shoot of the film had kickstarted very recently when a fire broke out at a studio in Mumbai's Goregaon on February 2. The blaze broke out during the afternoon hours due to a short circuit. As soon as the fire incident was reported, as many as eight fire tenders were rushed to the spot to the studio which is located near the Inorbit Mall in the city. Saif will be seen in the role of Lankesh, 'world's most intelligent demon' in the film.

Adipurush is Saif Ali Khan's second collaboration with director Om Raut. Previously, the actor worked with the director on Tanhanji: The Unsung Warrior where the actor played the antagonist Udaybhan. He also has Bhoot Police alongside Arjun Kapoor, Yami Gautam and Jacqueline Fernandez in the pipeline and is also rumoured to be a part of the official Hindi remake of Vikram Vedha.

(The above story first appeared on LatestLY on Feb 08, 2021 08:01 PM IST. For more news and updates on politics, world, sports, entertainment and lifestyle, log on to our website latestly.com).