Salman Khan's 55th Birthday Gift For Fans To Be Radhe: Your Most Wanted Bhai's Release Announcement?

As per reports, on the eve of December 27, Salman Khan's birthday, the actor is reportedly planning to announce his next film, Radhe: Your Most Wanted Bhai's release date. 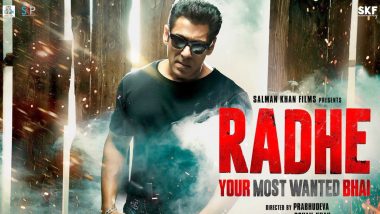 One of the first things that Salman Khan did once the COVID-19 lockdown was lifted and shoots resumed, was rush to complete his next movie Radhe: Your Most Wanted Bhai. The film has been in the making for a while now and as per various reports, Salman Khan is eyeing Eid 2021 release for his cop drama. Apart from this, there has been no other update yet on the movie. Radhe: Salman Khan and Disha Patani's Next Will Not Have a Digital Premiere, to Release on Big Screens on Eid 2021!.

However, if reports in Pinkvilla are to be believed, then an update about Radhe is Salman Khan's gift to his fans on his 55th birthday. As per the report, on the eve of December 27, Salman's birthday, the actor is reportedly -planning to announce Radhe's release date. Radhe Your Most Wanted Bhai: Here's The Tea On Jackie Shroff's Character In Salman Khan's Next Film.

The report reads, "Sources tell us that it looks like Salman Khan is planning a double celebration for all fans and might be announcing the release date of the film tomorrow. Well, if it's true then this news is once again going to bring a wave of joy to all the actor’s fans." Radhe stars actors Randeep Hooda, Disha Patani, Jackie Shroff and Gautam Gulati in pivotal roles. It is being directed by Prabhudeva.

(The above story first appeared on LatestLY on Dec 26, 2020 04:42 PM IST. For more news and updates on politics, world, sports, entertainment and lifestyle, log on to our website latestly.com).