Radhe Your Most Wanted Bhai: Here's The Tea On Jackie Shroff's Character In Salman Khan's Next Film

After their last outing Bharat, where Jacie Shroff played a loving father figure to Salman's character in Bharat, will now play a taskmaster in Radhe: Your Most Wanted Bhai. And here Jackie Dada's character details from Radhe. 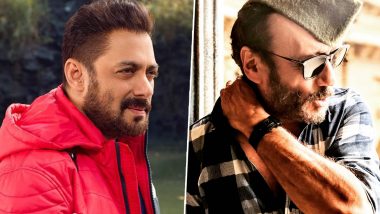 Actors Jackie Shroff and Salman Khan are quite the close friends. In fact, the two have been a part of multiple movies where they have shared screen space with one another. After their last outing Bharat, where Bollywood's Bhidu played a loving father figure to Salman's character in Bharat, will now play a taskmaster in Radhe: Your Most Wanted Bhai. And here Jackie Dada's character details from Radhe. As per reports in mid-day, Jackie will be seen donning the role of a quirky cop who will also be Salman's character's boss in the movie. Radhe: Salman Khan, Disha Patani, Randeep Hooda And Jackie Shroff Resume Shooting (Watch BTS Video).

"Jackie plays a senior police officer. His character is interesting, and quirky. While Jackie has played the role of a police officer in the past, this time around, he will approach the part in a light-hearted way. Salman will be seen taking instructions from Jackie in the film. The duo shares a close bond, and a sense of understanding was evident between them during the shoot," a source told the portal. Radhe: Salman Khan and Disha Patani's Next Will Not Have a Digital Premiere, to Release on Big Screens on Eid 2021!.

The report also mentioned how Salman made sure that Jackie shot for his remaining 4 days of Radhe after the COVID-19 lockdown was lifted in a close set. "This time, he (Jackie) had only four days of shoot left, and Salman was cautious when shooting resumed. He was concerned about Jackie, and ensured that his portions were wrapped up at the earliest. Jackie's scenes were shot in a confined space in a Karjat studio, and at Mehboob Studios."

Radhe: Your Most Wanted Bhai is a most wanted release. Helmed by Prabhudeva, the film also stars Disha Patani, Gautam Gulati, Randeep Hooda, and Zarina Wahab in lead roles along with singer Arjun Kanungo making his acting debut. There was talk of Radhe going digital and being sold to one of the country's leading OTT platforms, but the news was dismissed.

(The above story first appeared on LatestLY on Dec 26, 2020 11:58 AM IST. For more news and updates on politics, world, sports, entertainment and lifestyle, log on to our website latestly.com).