Radhe: Salman Khan and Disha Patani's Next Will Not Have a Digital Premiere, to Release on Big Screens on Eid 2021!

Salman Khan and Disha Patani starrer Radhe: Your Most Wanted Bhai will not be making its presence felt on the any OTT platform. But will instead release in theatres on Eid 2021. Read on. 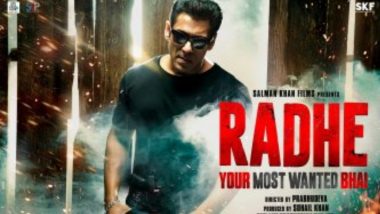 Bollywood superstar Salman Khan is known for his Eid releases and ofcourse minting a huge sum on the opening day of his film. The actor was last seen on the silverscreen in Dabangg 3 and after the same, fans of the superstar have been waiting for his next. Talking on the same lines, it has been reported time and again that Salman and Disha Patani's upcoming film Radhe: Your Most Wanted Bhai might go the digital way and skip its theatrical release. However now, as per a tweet by trade analyst Taran Adarsh, it's clear the air around that Radhe will release on big screens. Salman Khan To Book An Entire Floor Of Mehboob Studios To Complete Radhe Shoot In August (Deets Inside).

The tweet also suggested that the film will release next year on the occasion of Eid. "#RADHE #OTT RUMOURS BASELESS... There was speculation in the *exhibition sector* that #Radhe - starring #SalmanKhan - will skip theatrical release... Will stream on #OTT directly... FALSE... The producers are clear, #Radhe will release in *cinemas*, eyes #Eid2021 release," it reads. Radhe: Your Most Wanted Bhai - Salman Khan's Manager Refutes Rumours of Demanding Rs 250 Crore For the Film's Release on OTT Platform (Deets Inside).

#RADHE #OTT RUMOURS BASELESS... There was speculation in the *exhibition sector* that #Radhe - starring #SalmanKhan - will skip theatrical release... Will stream on #OTT directly... FALSE... The producers are clear, #Radhe will release in *cinemas*, eyes #Eid2021 release. pic.twitter.com/JGQnXSSlAD

Earlier, Radhe: Your Most Wanted Bhai was supposed to hit in May this year but owing to the spread of the novel coronavirus, the makers decided to push its release. This film also stars Jackie Shroff and Randeep Hooda.

Recently, Salman and his family were in the news as they had self-isolated themselves after the actor's driver and two staff members were tested COVID-19 positive. However, the superstar and his family later on tested negativ. Stay tuned!

(The above story first appeared on LatestLY on Nov 20, 2020 03:00 PM IST. For more news and updates on politics, world, sports, entertainment and lifestyle, log on to our website latestly.com).