Bollywood star is 40 years old and still has some interesting upcoming projects lined up. So take a look at every upcoming film of handsome and dashing Shahid Kapoor. 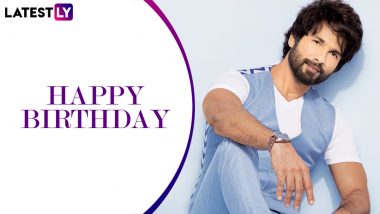 Shahid Kapoor turns 40 today and the Kabir Singh star has kept entertaining the fans through his films as he completes 21 years in the film industry. The Bollywood hunk started his acting career as the background dancer in the 90s and was noticed in the video songs and ads. Today he is one of the most talented actors we know of and his past films like Kabir Singh, Padmaavat says it all we consider their box-office numbers. Shahid Kapoor Shares Glimpse from Sets of Ali Abbas Zafar’s Untitled Next (View Pic).

Shahid Kapoor is a self-made man who had a decent entry in Bollywood. He made his debut with Amrita Rao and Shenaz Treasury starrer 2003 film Ishq Vishk for which he even bagged the Filmfare Award for Best Male Debut, His stellar performance in 2006 hit Vivah (2006) won hearts and just right after that Jab We Met happened which was a huge hit as well. Shahid had some notable acclaimed hits to his name including Kaminey and Haider. Bollywood star is 40 years old and still has some interesting upcoming projects lined up. So take a look at every upcoming film of handsome and dashing Shahid Kapoor. Jersey: Shahid Kapoor’s Sports Film To Release in Theatres on April 14; To Clash With Yash’s KGF Chapter 2.

Jersey
Shahid Kapoor is all set to play the role of a cricketer named Arjun Raichand in Jersey remake, Nani's 2019 Telugu hit and director Gowtam Tinnanuri who has helmed the original film is also directing the Hindi version. Mrunal Thakur plays the role of Shahid’s wife, whereas Pankaj Kapoor, will also be seen playing a pivotal role in the film. After a delay due to the COVID-19 Pandemic, Jersey is now slated to release on April 14.
Ali Abbas Zafar's Next
Shahid Kapoor is collaborating with Tiger Zinda Hai director Ali Abbas Zafar for the upcoming film. Shahid shared a candid smiling photo with the filmmaker and took to his Twitter handle and wrote, “Ye hain asli gyaani @aliabbaszafar #shootlife.” Reports suggest that the movie is an official adaptation of the 2011 French film, Nuit Blanche, which has already been remade in Tamil and Telugu as Thoongaa Vanam and Cheekati Rajyam starring Kamal Hassan in the lead role.
Bull
Shahid Kapoor is teaming up with producer Bhushan Kumar for an action film titled Bull. The movie is based on the life of Brigadier Farukh Bulsara and will be set in the 1980s. Earlier, Taran Adarsh had announced April 7, 2023 as the confirmed release date of the film.
Raj & DK's Web-Series
Shahid Kapoor is all set to make his OTT debut with The Family Man duo of Raj Nidimoru and Krishna DK for an upcoming web series. The show will premiere on Amazon Prime Video. Speaking about the project, Raj and DK said the show is based on their 'favourite script' and described it as their labour of love.
LatestLY and team wish the charming actor a Blessed Birthday! Keep entertaining fans in the years to come.

(The above story first appeared on LatestLY on Feb 25, 2022 09:01 AM IST. For more news and updates on politics, world, sports, entertainment and lifestyle, log on to our website latestly.com).