Shraddha Kapoor Birthday Special: Seven Biggest Hits Of The Actress That Make Her One Of The Box Office Queens Of Bollywood

Shraddha Kapoor, the birthday girl, has managed to set the box office on fire on multiple occasions. To celebrate her special day, we listed out seven such movies that made Shraddha one of the most bankable female stars in Bollywood. 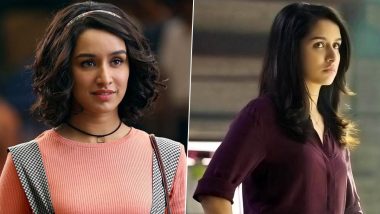 Shraddha Kapoor turns a year older today and also wiser. With the kind of movies the actress is associating with including the one with Ranbir Kapoor, Shraddha has definitely understood the game of Bollywood. The actress is also one of the darlings of the box office. Ever since Aashiqui 2 happened to her, she has been thrust into the big league with many big movies under her kitty. The box office has been kind to her as well.  Shraddha Kapoor’s Rumoured Boyfriend Rohan Shrestha Is ‘Family’ At Priyank Sharma And Shaza Morani’s Wedding (View Pic)

On her birthday today, let us talk about how Shraddha Kapoor because one of the most sought-after actresses of Bollywood with an incredible box office record.

Chhichhore is a one-of-kind film that was loved by everyone. A story of friends from college and one very beautiful girl everyone has a crush on, Chhichhore was relatable. It did a business of Rs 153.09 crore. Shraddha was appreciated in the film.

It was promoted as Baahubali Prabhas' big Bollywood debut but one of the reasons it got so much traction in the North was Shraddha Kapoor. The actor has a very strong fanbase who together with others made it a Rs 142.95 crore earning movie.

Who hasn't loved Stree? If the comedy and horror pleased some, Shraddha and Rajkummar Rao's chemistry wowed others. No wonder that the movie earned Rs 129.90 crore.

Remo D'souza managed to do something which others couldn't. He directed a dance-based movie and made it work without superstars in the lead. The sequel got bigger with Varun Dhawan and Shraddha. The movie earned Rs 105.74 crore at the box office.

Ek Villain, the love story of extremely full of life girl and a hitman did very well at the box office. Shraddha's act was praised by many. Guided by stellar music, Ek Villain managed to earned Rs 105. 62 crore.

Baaghi 3 was well on its way to be a huge hit when COVID-19 rudely halted its rise. Even then the film had managed to earn more than half of the movies that release in the first three months of 2020. It earned Rs 93.37 crore.

The movie that made it all happen for Shraddha. The second installment after Aashiqui from 1990, this became a huge turning point for the actress. Thanks to a brilliant music, the movie gave Shraddha her first blockbuster ever by earning Rs 78.42 crore.

(The above story first appeared on LatestLY on Mar 03, 2021 12:00 AM IST. For more news and updates on politics, world, sports, entertainment and lifestyle, log on to our website latestly.com).