Smita Patil Birth Anniversary: From Manthan to Bhumika – 5 Pathbreaking Roles of the Late Actress That Are A Must-Watch!

Bollywood actress Smita Patil was considered to be among the best in the showbiz and one of the finest stars of her time. She was born on October 17, 1955, and passed away in 1986. Here, check out her pathbreaking roles here. 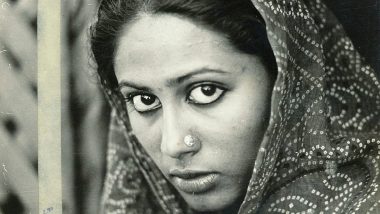 Bollywood actress Smita Patil was considered to be among the best in the showbiz and one of the finest stars of her time. She was born on October 17, 1955, and passed away in 1986. However, her movies are still cherished by the audience. Not just Hindi films, she also appeared in Marathi, Gujarati, Malayalam and Kanada movies in a career spanned over a decade. It was in the year 1975 when she made her debut with Shyam Benegal’s Charandas Chor and from thereon her journey to fame began. Smita Patil chose roles which echoed power and never settled for mediocre. Smita Patil Birthday: 9 Movies Of The Actress That Will Make You Miss Her Dearly.

She also had won the National Film Award for Best Actress for her performance in the Hindi film Bhumika. The actress was married to Raj Babbar and died from complications in childbirth. Her son is Prateik Babbar, who is a Bollywood actor. And as today, the legendary actress celebrates her 65th birth anniversary, here is a list of 5 pathbreaking films of the actress which are a must-watch. Prateik Babbar Birthday: The Roller Coaster Ride of a Life of the Chhichhore Actor You Should Know About.

Directed by Shyam Benegal, this movie was India's entry into the Oscars during that time and starred Smita Patil, Girish karnad, Naseeruddin Shah and Amrish Puri. The film was based on the White Revolution of India and won hearts.

Helmed by Prakash Mehra, Namak Haalal starred Amitabh Bachchan, Waheeda Rehman, Shashi Kapoor and Smita Patil in key roles and was commercially successful because of its storyline. Smita played the role of a character named Poonam in the flick.

Again a Shyam Benegal film, this one bagged Smita Patil a National Award for Best Actress. The movie was based on the life of a 1940s stage star, Hansa Wadkar. Smita's act as Urvashi/Usha was real as well as raw and that's what touched hearts.

This film highlighted corruption in contemporary society and was allegedly inspired by a true event. The satire starred Smita Patil, Naseeruddin Shah, Om Puri and Amrish Puri in lead roles and also had won 1980 National Film Award for Best Feature Film in Hindi.

If you have not watched this film, please do so as it is one of the finest work of the actress. She played the lead in the movie who runs away from the lies of her married life leaving behind her family to start a new life and make a mark for herself. Apart from Smita, the movie starred Rajesh Khanna, Tina Munim and Rakesh Roshan.

These were the five films which you cannot miss if you want to see the legendary actress' work which she has left behind. Yes, we know, she has done amazing work in many films, but these handpicked ones happen to be our favourite. Stay tuned!

(The above story first appeared on LatestLY on Oct 17, 2020 08:10 AM IST. For more news and updates on politics, world, sports, entertainment and lifestyle, log on to our website latestly.com).