Sooraj Pancholi Reveals He Auditioned for Kai Po Che, Says 'Nepotism Has Nothing to Do With What’s Happening Right Now' 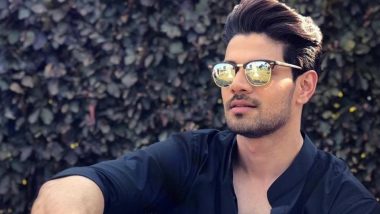 Sooraj Pancholi, son of Aditya Pancholi and Zarina Wahab, made his Bollywood debut with the 2015 film. His second film, Satellite Shankar, released in 2019. His third film, Time To Dance, has been under production for a long time now. The actor has said in a recent interview that if the film industry functioned solely on the basis of nepotism, he'd be on his tenth film now. Sooraj Pancholi Gets Dragged in Sushant Singh Rajput’s Suicide Controversy, After Twitterati Falsely Pins Him as Ex-Manager Disha Salian’s Boyfriend.

The debate about nepotism and outsiders has reignited after the death of Kai Po Che actor Sushant Singh Rajput. While talking to Bombay Times, Sooraj said, "If it was all about nepotism, I would have been on my 10th film by now. Nepotism has nothing to do with what’s happening right now. I worked from a very young age as an assistant director. First on Guzaarish (2010) and then on Ek Tha Tiger (2012). That is where I met Salman sir and he had promised me that he would give me a film because he must have seen some potential in me. He asked me whether I wanted to be an actor and I worked really hard for it."

Nevermind the fact that outsiders would gladly take up being an assistant director with Sanjay Leela Bhansali and Kabir Khan if given the opportunity. Access is a privilege.

Sooraj further added, "It’s not that I came out of nowhere, woke up from my sleep and went to a movie set. The first film that I auditioned for was Kai Po Che (2013), and I was rejected there. I worked on myself after that. I also auditioned for Hero (2015) and even my upcoming film Hawa Singh. My mom is 60. She has been in the industry for over 30 years and till date, she auditions for movies. It’s a myth that star kids don’t have to give auditions." Sooraj Pancholi Says 'Never Met Her' As He Clarifies Speculations Linking Him to Sushant Singh Rajput's Ex-Manager Disha Salian.

Kai Po Che became the debut film for Sushant Singh Rajput. The actor's last release will be Dil Bechara, an adaptation of The Fault In Our Stars. The movie will stream on Disney+ Hotstar from July 24.

(The above story first appeared on LatestLY on Jul 04, 2020 07:52 PM IST. For more news and updates on politics, world, sports, entertainment and lifestyle, log on to our website latestly.com).