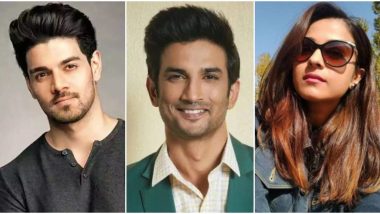 The propaganda around Sushant Singh Rajput's tragic demise is getting murkier by the day. When the actor took the fatal step on June 14, he didn't leave any suicide note. And yet we have been seen accusations being flung on Karan Johar, Ekta Kapoor, Salman Khan, Bollywood's nepotism gang by fans and even people in public limelight, like politicians and actors like Kangana Ranaut and Shekhar Suman. Now the latest celeb to be dragged in the SSR controversy is Sooraj Pancholi. Sushant Singh Rajput Was the Most Searched Keyword on Google in India for the Month of June.

Sooraj is already entangled in the ongoing case of actress Jiah Khan's suicide. The actor was dating Jiah, and she reportedly suffered from depression after having an abortion. Now certain Twitter users are pushing the same angle in the Sushant Singh Rajput controversy.

They are claiming that Sooraj Pancholi was dating Sushant's ex-manager, Disha Salian, who passed away a couple of weeks before Sushant's demise. She had fallen from a high-storey building, and the police are investigating if it was an accident or suicide. Fact Check: Was Sushant Singh Rajput’s Wikipedia Edited Before His Suicide, as Claimed by Twitterati? Here’s the Truth!

Now, certain Twitter users are alleging that Sooraj made her pregnant, which led her to commit suicide. And that Sushant was trying to help her out, before his suicide, thus making them add a foul play angle into his death.

Sooraj Pancholi is Salman Khan's protege, and the Bollywood superstar has already been accused by Twitterati of playing his part in Sushant's suicide.

Check out their tweets below:

The Filmy Story That Can Even Inspire RGV

What kind of justice is this where criminals are set free and innocents are silence ,? Jiah Khan murderer #SoorajPancholi is free , hit n run case closed

We still don't know if ex manager Disha actually committed suicide or it was a murder ?but justice don't care @PMOIndia pic.twitter.com/68QXqcIiSM

Sushant wanted to save his ex manager Disha who was pregnant with sooraj pancholi's baby n salman khan wanted to save Sooraj.. Preplanned murder @RoopaSpeaks @Payal_Rohatgi .. We want justice @PMOIndia

I don't understand why women would even DATE, let alone SLEEP with nose face nepo-trash Sooraj Pancholi. If this news about him impregnating SSR's manager, which led to her suicide cause she refused to abort the child as per #SoorajPancholi's wishes, HE NEEDS TO BE JAILED!

None of these Twitter users have shared any kind of verifiable reports while making these serious allegations.

So what's the truth? Check out the verifiable facts below:

#1 In the investigations done so far, the police has ruled out any foul play in Sushant Singh Rajput's demise and are now looking into the reasons why he died by suicide.

#2 They haven't even ascertained if there is any link between Sushant and Disha's deaths.

#3 Sooraj Pancholi's name hasn't come up in any of the investigations till now.

#4 Above all, Sooraj Pancholi wasn't Disha Salian's boyfriend. There is no established link between the two. Before her tragic demise, Disha was dating television actor Rohan Rai, who is being investigated by the police. Disha Salian Death: Police Uncertain About Cause of Death, Says 'Not Sure If It Was a Suicide or an Accident'.

There is nothing wrong if your outrage against Sooraj Pancholi is with regards to Jiah Khan's suicide. But to drag him in an unconnected controversy is a very cheap ploy.

While both Disha and Sushant's losses are tragic, what's more hurtful is how people are making their own theories that lack any kind of substance and are hurting the memories of those who passed away. It is incredulous to see how certain people are dragging a poor, unfortunate girl's name, whose family would be still grieving her loss, just to malign someone they hate.

(The above story first appeared on LatestLY on Jul 03, 2020 10:05 AM IST. For more news and updates on politics, world, sports, entertainment and lifestyle, log on to our website latestly.com).