Diwali this year has releases at the theatre in the form. Of Sooryavanshi, Annaatthe and Eternals. Trade expert tells LatestLY how much these movies will make this Diwali 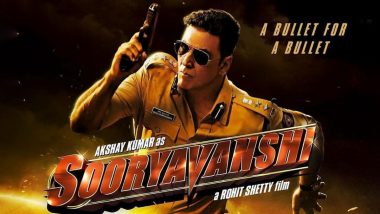 Sooryavanshi, the big ticket action bonanza starring Akshay Kumar and Katrina Kaif, will finally release on November 5. The film was supposed to hit the theatres in March 2020 but the COVID-19 pandemic derailed its plan. So now, it's a Diwali release of 2021 and is opening with humongous expectations. It's a tentpole release and the entire industry is hoping to get out of the cash-starved situation thanks to it. Other films which are releasing are Annatthe and Eternals. We spoke to Trade Analyst and Film Producer Girish Johar who is hopeful about the films' prospects this Diwali. Sooryavanshi: Akshay Kumar and Katrina Kaif's Film Gets U/A Certificate

Johar says, "A lot is riding on these movies. The movies that are releasing, we hope they at least manage to make half of what they did in the pre-pandemic levels. That would be a big boost to the industry. We have to understand here that there are still theatres which have opened with limited occupancy. So, the release is still fragmented." Sooryavanshi Song Najaa: Akshay Kumar, Katrina Kaif’s Sizzling Chemistry Is Top-Notch in This Peppy Dance Number (Watch Video)

Diwali generally showers movies with great dividends. Thugs of Hindostan, which bombed at the box office, opened with over Rs 50 crore as its first day performance. So going by Johar's predictions, even if the recent release manages to earn even half of that, the industry should feel relieved.

Sooryavanshi has a good buzz around it as it is a part of Rohit Shetty's cop universe and has special appearances by Ajay Devgn and Ranveer Singh as well. The film stars Akshay Kumar and Katrina Kaif. Rajinikanth's Annaatthe is also riding high on being the first release of the superstar post the pandemic. The actor has a huge fan following across India which is expected to help its box office returns. Eternals however has received mixed to negative reviews but it's not sure if that will ruin its chances in India

(The above story first appeared on LatestLY on Nov 03, 2021 07:21 PM IST. For more news and updates on politics, world, sports, entertainment and lifestyle, log on to our website latestly.com).