Stree 2: Is Abhishek Banerjee Returning for Upcoming Horror-Comedy Sequel? Here's What Helmet Star Has To Say on This! (LatestLY Exclusive)

For starters, Abhishek Banerjee played the role of Jaana in Rajkumar Rao and Shraddha Kapoor's Stree. Also, it's been a while since an update is awaited about the horror comedy. Read the full story! 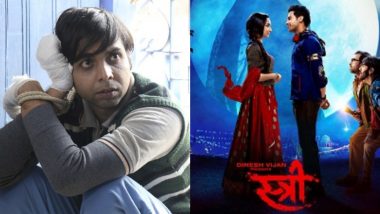 Actor-casting director, Abhishek Banerjee who made his first film appearance in Aamir Khan's Rang De Basanti is now a successful star. Over the last few years, the actor has cemented his position in the industry by doing challenging roles. Right from starring in light-hearted movies like Stree, Bala, Dream Girl to even impressing the masses with his solid work on OTT platforms in Unpaused, Paatal Lok, Ajeeb Daastaans, he's a force to reckon with. Well, out of the many roles he has played until now, Abhishek's portrayal as Jaana from Stree (2018) was much loved.  Abhishek Banerjee Opens Up About His Two Upcoming Films Helmet and Ankahi Kahaniya, Says ‘I Am Very Excited’

Stree starring Shraddha Kapoor and Rajkummar Rao, saw Abhishek Banerjee playing quirky friend to Rao's Vicky.  If you've seen the horror-comedy, you'll know that he was the one who gets possessed by a ghost in the film. And recently, when the actor exclusively interacted with us (LatestLY), we had to ask him about Stree 2.  Shraddha Kapoor and Rajkummar Rao Celebrate 2 Years of Stree, Actress Shares BTS Pictures.

When we quizzed him about an update on Stree 2, Abhishek happily said, "Not just the audience, even I am excited for Stree 2. I got to know from the media itself that the movie is happening and I feel absolutely great about it. My character as Jaana (Vicky and Bittu's friend) was loved by fans a lot. Now, when the film will go on floors and other details, I have no idea about, but I am elated that’s it on the cards." Abhishek Banerjee Says He Owes It to OTT as a Platform for Helping Him Change His Image in Showbiz.

Abhishek Banerjee will be next seen in ZEE5's Helmet as Sultan. The story of the film revolves around a bunch of friends who turn entrepreneurs with a truckload of condoms. The flick also stars Aparshakti Khurana, Pranutan Bahl, Ashish Verma and Sharib Hashmi. Stay tuned!

(The above story first appeared on LatestLY on Aug 23, 2021 07:19 PM IST. For more news and updates on politics, world, sports, entertainment and lifestyle, log on to our website latestly.com).