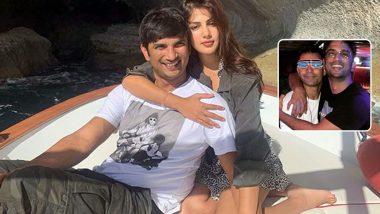 Hours after the Enforcement Directorate (ED) rejected Rhea Chakraborty's request for deferring her questioning, the actor appeared before the financial probe agency in Mumbai on Friday. Rhea arrived at the ED office here along with her brother Showik Chakraborty at 11.50 a.m. for questioning. The ED will record her statement under the Prevention of the Money Laundering Act (PMLA), 2002. It will question her about financial delaings and the investment into properties. The ED will also question her about the financial transactions from the late actor's bank account in the last one year. Sushant Singh Rajput Death Probe: Rhea Chakraborty Reaches ED Office to Record her Statement (View Pics)

The ED named Rhea and her family members in the case on the basis of the FIR filed by the Bihar Police. The ED has also sought details of the financial transactions of the firm -- Vividrage Rhealityx, in which Rhea is a director; and Front India For World, in which her brother Showik Chakraborty is a director. Earlier in the day, Rhea requested the ED to defer her questioning in connection with the money laundering probe involving the death of Sushant and call her only after the Supreme Court hearing. On Thursday, the CBI booked Rhea and her family members in the death of the 34-year-old actor in his Bandra flat on June 14.

(The above story first appeared on LatestLY on Aug 07, 2020 01:26 PM IST. For more news and updates on politics, world, sports, entertainment and lifestyle, log on to our website latestly.com).