Kabir Singh actress Kiara Advani has admitted earlier that she is a huge fan of Telugu star Vijay Deverakonda. 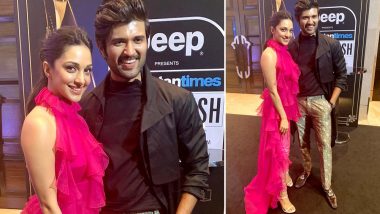 Vijay Deverakonda’s film Arjun Reddy that released two years ago, was a commercially successful film. The film is now been remade in Hindi titled Kabir Singh. Shahid Kapoor and Kiara Advani have been roped in as the lead actors. The film is directed by Sandeep Vanga, the one who directed the original film. Yesterday (March 29) HT India’s Most Stylish Awards, Kiara bumped into the Telugu star and she definitely couldn’t resist clicking pictures with him and sharing on social media platforms. These pictures show how Kiara couldn’t stop blushing when she met her favourite star, Vijay Deverakonda. Shahid Kapoor's Romantic Scene With Kiara Advani in Kabir Singh LEAKED! Watch Video.

Kiara Advani shared a series of photos on her Instagram stories and one on the feed as well. She captioned it as, “When Preeti met Arjun @thedeverakonda”. The actress’ fans were delighted to see Kiara sharing the frame with the real Arjun Reddy hero. For those who don’t know, Kiara has even admitted that she is a huge fan of Vijay. Previously in an interview she was quoted saying, “Vijay Devarakonda and Shalini were so good in the original. I’m a huge fan of Vijay, who I think is a great actor.” Rashmika Mandanna Reacts to the Kissing Scene With Vijay Deverakonda in Dear Comrade – Watch Video.

Take a look at the picture that Kiara Advani shared:

And here are some more pictures of Kiara and Vijay from the event:

Kabir Singh, produced by Bhushan Kumar, Murad Khetani, Krishan Kumar and Ashwin Varde is scheduled to release in June. Shahid Kapoor will be seen essaying the titular role whereas Kiara Advani will be playing the character named Preeti. Stay tuned for further updates on the film and other stories from the world of entertainment.

(The above story first appeared on LatestLY on Mar 30, 2019 12:03 PM IST. For more news and updates on politics, world, sports, entertainment and lifestyle, log on to our website latestly.com).