WWE superstar Amitabh Bachchan posts a picture of Amitabh and Abhishek Bachchan after the two test coronavirus positive. Check it out. 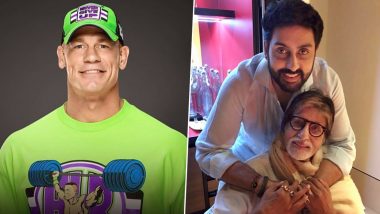 On July 11, it was revealed that Bollywood Shahenshah Amitabha Bachchan and his son Abhishek Bachchan are COVID-19 positive. The two were admitted to Mumbai's Nanavati hospital. Further, a day later, Abhishek's wife Aishwarya Rai, as well as little daughter Aaradhya were also confirmed to be infected by coronavirus whereas Jaya Bachchan was tested negative. Since then many get well soon messages and quick recovery prayers are all over the internet for the Bachchans. Recently, it was WWE superstar John Cena who took to his Instagram and posted a picture featuring Amitabh and Abhishek. Amit Sadh, Abhishek Bachchan's Breathe Into the Shadows Co-star Confirms Testing Negative for COVID-19.

The legend posted a photo of senior and junior Bachchan, but without a caption. Well, it was quite evident that all Cena meant with the post was a speedy recovery for the two. This move by the WWE champion got lauded by fans and in no time his post went viral and how. John's comment section was filled with positivity and the post has crossed 6 lakh likes till now. Juhi Chawla Recommends Amitabh Bachchan, Abhishek Bachchan to Try 'Ayurveda'; Twitterati Thinks She Misspelt Aaradhya (View Tweet).

Well, this is not the first time Cena has made a post with regards to actors from Hindi cinema. As earlier, he has paid tribute to late actors like Sushant Singh Rajput, Rishi Kapoor and Irrfan Khan. Coming back to his latest share for the Bachchans, we so wished there would have been a caption. Stay tuned!

(The above story first appeared on LatestLY on Jul 13, 2020 03:37 PM IST. For more news and updates on politics, world, sports, entertainment and lifestyle, log on to our website latestly.com).