Despite a lot not happening in 2020 due to the disgusting COVID-19, a lot happened and here we summarised the five biggest trends of a year that was dismantled by a virus. 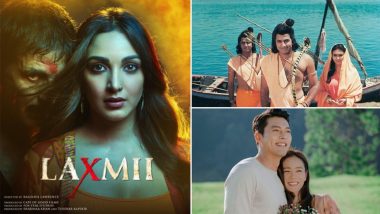 Laxmii, Ramayan and Crash Landing On You (Photo credit: Twitter)

2020 changed has changed humanity in a big way. It also transformed our entertainment needs or demands. In terms of entertainment consumption, this was THE YEAR. The generation that was till recently scratching their heads figuring out why the oldies just can't shut up about the good old Doordarshan, finally know the answer. Ramayan and Mahabharat went back to being the most-watched shows on TV during the lockdown, just like they did when they first hit the tube, over thirty years ago. Along came a lot of other old shows, that helped give the citizens holed up in their houses some respite in these unprecedented and uncertain times. Year Ender 2020: The Year of COVID-19, Lockdowns, Crippled Economies & Now Hope as We Ring in 2021

So as we wrap this devastating year, here're a few trends which changed the way we view content now.

The revival of Doordarshan

Doordarshan once upon a time was the best thing to happen to people who could afford Television. It has everything from fiction, non-fiction, docu-series, historicals, cartoon shows, farmer shows, film song program...you name and it had it. And since it was the only channel, many of us have been fortunate enough to have memories of good Television content. That's why national television did a masterstroke when it revived some of its popular shows from the 80s and 90s and started airing them for the locked-down public. Apart from the mythological, there was Byomkesh Bakshi, Shaktimaan, Jungle Book and many such amazing TV shows which made a return. After many years, DD1 managed to have a TV show in the topmost rank on the BARC list with Ramayan.

Releasing movies exclusively on digital platforms is a trend that could have happened 10 years down the line. For India, getting away from the habit of going to theatres to watch a movie on smartphones was something unheard of till last year. But COVID-19 has fast-forwarded it and we saw big-ticket movies like Laxmii, Ludo, Shakuntala Devi, release on OTT platforms. The fact that some of them were made keeping the single screen viewers in mind can be easily understood from the quality of content. What worked in the favour of the movies that were rejected on OTT as well (read Laxmii), was there were repetitive reminders in the form of box office numbers. This trend is not going anywhere, and that's for sure.

OTT platforms which were an alternative to movies or TV shows all this while, became the primary means of entertainment. The shows and movies were devoured. Every platform upped their ante and released a lot of content to feed the need for entertainment this time. Many reports suggest that documentaries that generally have a niche audience, saw a surge in views. Remember The Social Dilemma? The consumption trend has changed and all for the good.

Korean dramas with Crash Landing On You

The Hallyu wave had hit India long back but it was still taking smaller steps towards popularity. Come lockdown and a fantastic assortment of same on Netflix, made sure India viewed Crash Landing On You a lot. Hell, it even saw a surge of Korean language learners from India. Shows like Goblin, It's Okay Not Be Okay, Start-Up got immense likes and love in India. Now everyone claims to be a K-drama fan! K-dramas with escapist romance is something that puts everyone in a good mood and that's exactly what we needed all this year.

The rise of actors as superstars

One of the best things about OTT content is that they employ actors rather than stars. And thanks to the lockdown, preferences of audience in terms of great actors moved from the usual Varun Dhawan to the brilliant Vikrant Massey or the cutest kid on the block Rohit Saraf. Netflix even moved on from Radhika Apte to Vikrant, as their blue-eyed craze. This is one trend we really want to see spill over the movies at the theatres.

(The above story first appeared on LatestLY on Dec 18, 2020 08:45 PM IST. For more news and updates on politics, world, sports, entertainment and lifestyle, log on to our website latestly.com).