2021 was high on great music and it was really tough to pick the seven most loved songs of the year, but here we are with the final list. From Sidharth Malhotra-Kiara Advani's Raataan Lambiyan to Sara Ali Khan's Chaka Chak, check out the viral Hindi tracks of the year. Read the full story! 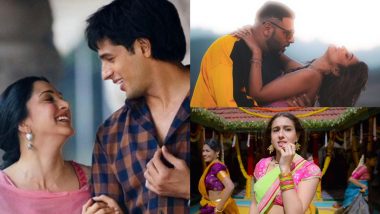 Music has the power to heal. Be it a romantic number or a trending song, we all have our favourites. Having said that, this year apart from some fantastic content on OTT and big screens, fans also witnessed melodies that made music lovers go wow. From Badshah’s viral track Jugnu, Sara Ali Khan’s Chaka Chak to Sidharth Malhotra-Kiara Advani’s Raatan Lambiya, 2021 was high on great songs. The best part this year was that there were tracks from each genre that ruled the chart. And so, before we bid adieu to 2021, we thought of compiling all-time hit Hindi songs from this year that went viral and took the internet by storm. Year Ender 2021: From Samantha Ruth Prabhu’s Oo Antava Oooo Antava To Sivakarthikeyan’s Chellamma, 5 Sensational South Songs That Became Viral (Watch Videos).

First on our list is this soulful melody from Shershaah featuring Sidharth and Kiara. From the time it got released, the track was played almost at every lovey-dovey occasion across the globe. Sung by Jubin Nautiyal and Asees Kaur, this one was the top-rated romantic track of the year.

TV stars Hina Khan and Shaheer Sheikh for the very first time collaborated for a song and were loved by the audiences. Their chemistry amidst a picturesque locale of Kashmir was highly appreciated in this Payal Dev and Stebin Ben sung pyaar filled track.

Janhvi Kapoor in this beautiful song from the film Roohi became an instant hit thanks to its catchy BGM. Composed by Sachin-Jigar, the number saw the actress flaunting her sizzling moves that won hearts.

Up next on the list we have a Kriti Sanon song from Mimi that went viral on the internet. Right from the hook step to the lyrics, the audience, as well as industry wallahs, want gaga over the actress' moves. The song is sung by Shreya Ghoshal and composed by AR Rahman.

Rapper Badshah’s Jugnu song can be termed as the most Instagram reeled and loved track of 2021. Even though the melody is simple, it’s the music and signature step of the number that is delightful and vibrant to watch. Year Ender 2021: From Ahan Shetty, Sharvari Wagh to Isabelle Kaif – Ranking Bollywood Debutants Based On Their Performances.

Nora Fatehi is the best dancer in the business and there’s no one like her. From Satyameva Jayate 2, this item number of the hottie in which she belly dances  and goes Kusu Kusu is totally insane. Just like the fans, even we are mesmerised by her talent.

Composed by AR Rahman, the last song on our list is Sara Ali Khan’s Chaka Chak that started trending furiously online from the time it was released. Right from the actress’ thumkas to desi vibe of it, this Atrangi Re’s track has been a global phenomenon.

Well, must say that 2021 was an amazing year with regards to Hindi music. Let’s see what next year i.e 2022 has in store for all of us. Until then, keep listening to your favourite tunes. Goodbye!

(The above story first appeared on LatestLY on Dec 28, 2021 08:09 PM IST. For more news and updates on politics, world, sports, entertainment and lifestyle, log on to our website latestly.com).