Amazon Prime Video has collaborated with five fabulous directors from the Tamil cinema to churn an anthology movie titled as Putham Pudhu Kaalai. Read on. 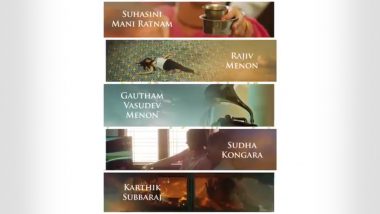 COVID-19 has created a situation like never before. All things are almost digitalised and so is cinema. Be it Bollywood or regional films OTT is the new theatre of sorts to tell stories. And well, looks like Amazon Prime Video has collaborated with five fabulous directors from Kollywood to churn an anthology movie titled as Putham Pudhu Kaalai. This one will have five short films shot amid the pandemic. Interesting, right? On September 30, 2020, the makers announced the news about the regional movie and released the filmmakers as well as the actors names from each of the flicks. Harish Kalyan Confirms Relationship With Priya Bhavani Shankar! Tamil Actor Says, ‘Love Is In The Air’ (View Post).

Elaborating on the same, the five directors showcasing their art and telling a tale are Sudha Kongara (Ilamai Idho Idho), Gautham Menon (Avarum Naanum/ Avalum Naanum), Suhasini Mani Ratnam (Coffee Any One?), Rajiv Menon (Reunion), and Karthik Subbaraj (Miracle). The releasing date of these Amazon Original short films happens to be from October 16, 2020. We bet this is indeed going to be a treat for many fans. Pushpa: R Madhavan To Play Antagonist in Allu Arjun's Movie? Maddy Answers!

And Here's The Names Of The Actors From Every Film:

Going by the overall cast and also the five promising filmmakers seems like Putham Pudhu Kaalai is going to be a huge hit. And why not, as who would not like meanignful cinema just a click away. Are you excited? As we are for sure. Stay tuned!

(The above story first appeared on LatestLY on Sep 30, 2020 12:17 PM IST. For more news and updates on politics, world, sports, entertainment and lifestyle, log on to our website latestly.com).