Angry Birds Movie 2 New Trailer: Birds and Pigs Team Up to Fight Zeta, But Can They Really Get Along?

A new trailer of Angry Birds Movie 2 is here and it is much funnier than the one before. A new character of Silver is also introduced which is voiced by Rebecca Bloom. Frenemies birds and pigs are now teaming up too. Catch all this in the new trailer. 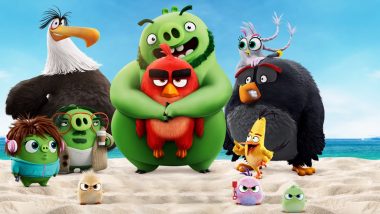 A new trailer of Angry Birds Movie 2 has been released by the makers and it looks super fun, just like initial trailers. We are also introduced to the new character of Silver voiced by Rachel Bloom. We had already been introduced to the other new character, Zeta voiced by Leslie Jones who is bored of being stranded on an icy planet and is shooting ice cannons to look out for company and guess where her ice balls land up? Well, in the land of the birds and pigs. . Nicki Minaj Joins Cast of ‘The Angry Birds Movie 2’, Will Lend Her Voice to Character in the Movie.

In the new trailer, we see Red being annoyed by Silver and her smartness. Actors working on the film, who have lent their voices include, Peter Dinklage, Josh Gad, Sterling K. Brown, Bill Hader, Jason Sudeikis, Rachel Bloom, Awkwafina, Nicki Minaj, Eugenio Derbez. Bill Hader returns as Leonard, King of the pigs and Sudeikis as Red.

Take a look at the new trailer here:

The new trailer mainly focuses on Red and Leonard trying to come together despite their past animosity. The frenemies are having a hard time working as a team as they prepare to fight Zeta. In one of the funny scenes in the trailer, we see the birds and the pigs attempting to sneak on Zeta's island using a giant bird as their disguise which leads to a break-dance challenge with one of the guards. This scene is certainly hilarious.

This is the final trailer of the film before its release which is slated for August 23. The first film in the Angry Birds franchise was received well as the audiences enjoyed watching their favourite game characters came onto the silver screen. The film has been directed by Thurop Van Orman and John Rice and from the final trailer, it looks like it is going to be a fun ride.

(The above story first appeared on LatestLY on Jun 21, 2019 02:25 PM IST. For more news and updates on politics, world, sports, entertainment and lifestyle, log on to our website latestly.com).