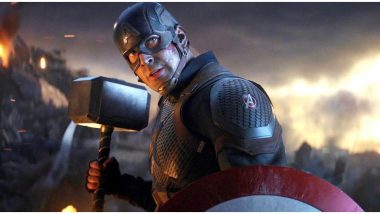 It has been over a year since MCU's Infinity Saga has come to a conclusion. The new phase is all set to begin soon. Fans have been watching and rewatching the past movies. And, the worst of the rewatch marathons is that everyone is finally picking up on loopholes in the plot. This story is about a plot point in Avengers: Endgame. In the movie, Captain America lifts Thor's hammer, a plot point which has been building up since Age of Ultron. Avengers Endgame Writer Slams Martin Scorsese with an Epic Reply to His ‘Marvel Movies Are Not Cinema’ Remark.

But that is not all. Captain America (Chris Evans) also summons lighting with the hammer. Cool shot, but it renders one of the plot points from Thor: Ragnarok useless. You see, Thor (Chris Hemsworth) was told by his father that he is the God of Thunder and Lighting because he is worthy and not because of his hammer. He is still the mighty Thor even without his hammer. Basically, meaning that the power did not lie in the hammer.

While speaking to /Film, Endgame co-writer Christopher Markus confirmed that the filmmakers had a dispute over Steve's sudden ability to summon lightning with the Mjolnir. He said:

"There was certainly a debate at one point because particularly in Ragnarok, it establishes that Thor can summon the lightning without the hammer. I think Odin even says, 'It was never the hammer.' And yet Cap summons the lightning with the hammer. You get to those things and you’re like, 'It’s too awesome not to do it! We’ll talk about it later.'"

"It was actually in the [outline] that we gave Marvel in the summer of 2015. ‘Cap picks up Thor’s hammer.’ And it was like, ‘Yeah, we’re doing that somewhere.’ I remember debating about whether we should see – I think we shot it both ways – you see Cap, he looks at Thor and Thor is so screwed, and then Cap looks over and he sees the hammer. Do you reveal it that way first? You could do it any number of ways."

But in Thor (2011), Odin had said,  "Whosoever holds this hammer if he be worthy, shall possess the power of Thor." So, maybe whoever is worthy also receives the same powers such as summoning lighting. Well, we can debate about it forever.

(The above story first appeared on LatestLY on Jun 20, 2020 07:22 PM IST. For more news and updates on politics, world, sports, entertainment and lifestyle, log on to our website latestly.com).