Avengers: Endgame Was this Marvel Character's Last Movie in MCU, May Leave the Universe Very Soon

Can you guess this superhero character who may bid adieu to Marvel Cinematic Universe very soon? 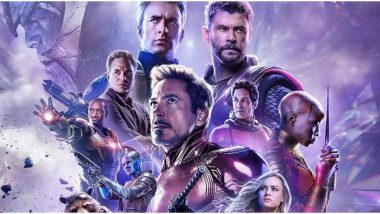 While we know Scarlett Johansson's Natasha Romanoff aka Black Widow has left MCU for good and of course, Iron Man is dead and Captain America has retired while passing over his mantle to Falcon, there's one more superhero character who may exit MCU next. No, not the character will be shown dead or something but there are reports that his existing contract has expired and there are no fresh reports about renewing it. Yes, it's a 'he' and it's Don Cheadle's War Machine. From Avengers Endgame To Knives Out, 11 Hollywood Films That Impressed Us The Most In 2019.

In his recent interaction, Cheadle had revealed that he earlier had a six-movie contract with Marvel which expired after his last outing in Avengers: Endgame. The character earlier appeared in Iron Man 2, Iron Man 3, Age of Ultron, Civil War, Infinity War and Endgame was his last among the six releases. So, it's still unclear if the actor would bid adieu to the universe or Marvel will think about extending his contract. Though the chances for the latter are very bleak since his character was not-so-popular with Marvel fans.

“I was actually at my kid’s birthday party—a laser tag party—and I got a call from my agent, and they said, ‘Hey, so I want to connect you to these Marvel guys. They want to talk to you, but they want to offer you the part.’ I don’t think it was [Kevin] Feige. I don’t know who was on the phone. But they said, ‘Hey, this is the role. We want you to do this. It’s a six-picture deal.’ I was like, ‘What?! Oh, uh, okay…’ And I’m trying to do the math. I’m like, ‘That’s 11 or 12 years. I’m not sure.’ And they’re like, ‘Well, we need to know, because if you’re not saying yes, then we’re gonna move on to the next person. So you’ve got an hour,'" Don said while explaining how he bagged the role. Malang Actress Disha Patani Reveals Her Two Favourite Avengers Endgame Super-Heroes and Great Choice is All We Can Say!

Though we read reports about him getting a solo show on Disney+, there has been no official announcement on the same.

(The above story first appeared on LatestLY on Apr 13, 2020 01:25 PM IST. For more news and updates on politics, world, sports, entertainment and lifestyle, log on to our website latestly.com).