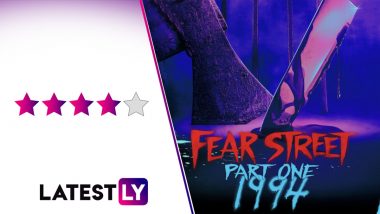 As the title suggests, the movie takes place in 1994; it focuses on a group of teenagers who find out that they are the targets of a witch after they disturb her grave. Right off the bat, Fear Street has a great opening sequence that is a fine homage to '80s slasher films. It helps in setting up the tone of the film while providing some good world-building, as you learn about the shady past of the town of Shadyside. The world-building is quite in the vein of Derry, Maine from Stephen King’s It. The movie proudly wears its inspirations  from classic horror franchises on its sleeves, but never engages into shameless pandering, an accusation Stranger Things often faces. Fan service exists not just for the sake of it, but it rather helps in developing Fear Street’s story.

The characters act smart too which is a welcome idea, because the movies that inspired Fear Street Part 1: 1994 are known to have dumb leads who do dumb things. Remember how The Cabin in the Woods and The Final Girls parodied that trope? As an audience, it gets frustrating because you’re being taken for granted, but with Fear Street, you never feel like that. The characters do have a sense of their surroundings, they make logical decisions and act smart based on that. The movie ups the stakes and makes you care about them, it genuinely does help in building up these characters that could have rather been annoying.

The designs of the killers also have a striking concept to them as one of them clearly takes inspiration from Scream, one tries to emulate the fear of Leatherface from Texas Chainsaw Massacre. There is a certain scene that will make the horror geek inside you jump with excitement when Fear Street pays a great homage to an iconic scene from The Shining. While not necessarily scary, it still manages to deliver the thrills as there is a buildup to each scene and it’s handled really well. Also the third act has some fun kills that will definitely appeal to the horror fan within you. Sweet Tooth Review: DC’s Netflix Series Is a Sweet, Hopeful Journey Through a Dystopian World (LatestLY Exclusive).

Fear Street also has this folklore sort of vibe attached to it which gives the story more depth. It never takes over too much of the plot as it hits the right amount of exposition needed to get you up to speed with things. Fear Street spins a unique narrative on a possession which is really crucial to the town itself, it helps in making the town feel like its own character where you learn of these crimes that have taken place and just how miserable it is. It ends on a great cliffhanger as well, for there is a neat teaser attached to the end for when Fear Street Part Two: 1978 drops next week.

Speaking about the flaws, the soundtrack is just a mess at times; the choices of songs over here just didn’t work for me. Every other scene just felt like they wanted to amp it up with a classic track from the ’90s, if I didn’t know any better, I would have thought that someone just left their mixtape to play on shuffle. Dom Review: A Tonally Inconsistent But Entertaining Saga About the Brazilian Favela (LatestLY Exclusive).

I might be nitpicking here, but I also wasn't a fan of the high school drama at the beginning. It felt like a teen drama from a CW show. It doesn't even add much to the main plotline.

-Soundtrack is a mess.

-Teen drama at the start fails to grab your attention.

Fear Street Part One: 1994 offers a fun time if you’re a slasher film fan. It manages to take inspiration from the classics that have defined the genre while still keeping itself entertaining and fresh. With its cliffhanger ending, it just has me more excited for what the team has in the bag as Fear Street Part Two: 1978 drops on July 9 2021 on Netflix.

(The above story first appeared on LatestLY on Jul 02, 2021 07:16 PM IST. For more news and updates on politics, world, sports, entertainment and lifestyle, log on to our website latestly.com).