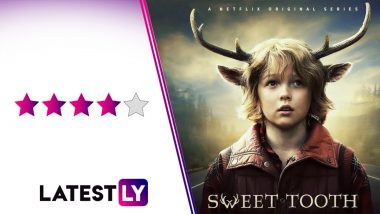 Sweet Tooth Review: Sweet Tooth is a fantasy drama television series that is based on the DC comic series of the same name written by Jeff Lemire. The series was developed for Netflix by Jim Mickle and stars Christian Convery and Nonso Anozie. It follows the story of Gus, a hybrid of a human and deer who sets out on a journey with Jepperd in order to find out about his origins. Sweet Tooth Season 1: Review, Cast, Streaming Date and Time of Christian Convery's Series on Netflix!

The series takes place 10 years after an event called The Great Crumble, in which the entire world came crumbling down due to a contagious virus, and at the same time the hybrids started showing up. Unclear if the hybrids were the cause of the virus, humans started blaming them and hunting them down. That’s basically the gist of what Sweet Tooth is about and what an amazing adventure it was from start to finish.

Stories nowadays relating to any virus, seem to focus more on the grimmer and harsh realities of life and the world and while those stories have their space in the medium of art, Sweet Tooth takes that concept and flips it over. Hope and optimism is filled at every corner of this show, and yes while it does showcase the harsh realities of the world, Sweet Tooth still finds levity in those moments and helps us show that everyone has some kind of purpose in this world.

Christian Convery is a huge contributor to this because the character of Gus is largely responsible for the tone of the show and he acts as a great contrast to the world of Sweet Tooth. While the world is harsh and cruel, Gus was sheltered from it for his entire life, and when he learns something new, we as the audience learn about it as well. Hiis chemistry with Nonzo Anozie’s Jepperd is wonderfully done as well since he is able to bring out the kindness in this angst-ridden person who has sheltered his emotions for so long. It’s this great character development that really drives this show forward.

Sweet Tooth has a great diverse cast of characters, especially Adeel Akhtar as Dr Aditya Singh who is trying to find a cure for the virus but is questioning the moralities involved in reaching that goal. The world-building is quite well done too, it shows how people have adapted to living in this new age, how things have regressed back and how there is a militia in control of a lot of the stuff around. Sweet Tooth makes the world seem authentic and adds a flair of realism while not managing to lose its tone in the process. Even the fact that the show is based around a pandemic taking down the entire world, and currently living through a pandemic in real life, the show never goes over the top with its portrayal of it since the subject matter can be a bit sensitive in recent times. Sweet Tooth Review: Netflix’s New Tale About a Dystopian World Will Fill You with Hope and Optimism, Say Critics.

The cinematography is the star of the show, with great wide shots of luscious green mountains, the scenery, the desolate state of the world, everything is captured so well that it acts as a great backdrop for Sweet Tooth’s amazing score. The soundtrack is filled with some great song choices and the music is just the cherry on top of the cake. All this helps in creating a great atmosphere for the scenes that play off really well with each other. All the elements are present and executed very well. Sweet Tooth doesn’t tiptoe around some really dark subject matters, after all it’s a story about a virus taking down humanity, so it shows the cruelty of people but it never deviates from its tone. It’s all done in service for being effective in what it’s trying to convey through the different contrasting views of Sweet Tooth’s world.

While Sweet Tooth is indeed really good, it does have a bit of problems. Aside from Gus and Jepperd’s story, it follows two other storylines as well. One of which has to do with a preserve base for hybrids, I never really felt that connected to the story because it wasn’t developed that much. It is important within the context of Sweet Tooth’s story but the show never really gives it the time it needs to be fleshed out, so whenever it cuts back to the preserve, it fails to grab your attention. While this is a bit of a nitpick, it has to be noted that some of the shots very visibly look like they were filmed in front of a green screen, although the majority of the CGI in Sweet Tooth is well done in regards to this being a show.

- One particular storyline isn’t that fleshed out

-Noticeable green screen in some scenes.

Sweet Tooth manages to be a sweet ride despite dealing with dystopian themes. It manages to bring hope and optimism while not shying away from dark themes, and it does wonders for the show. If you’re looking for a feel good show that will leave you smiling after you are done with it, Sweet Tooth, streaming on Netflix, is the one for you.

(The above story first appeared on LatestLY on Jun 07, 2021 04:34 PM IST. For more news and updates on politics, world, sports, entertainment and lifestyle, log on to our website latestly.com).