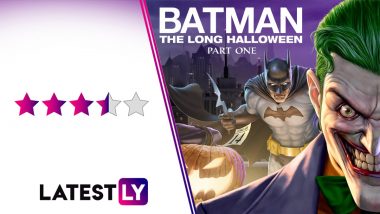 Batman the Long Halloween - Part One Movie Review: DC just recently rebooted its animated universe and has come out with films like Superman: Man of Tomorrow and Justice Society: World War II. These movies feature an updated art style to their animation which gives it more of a visual fair than the previous DC animated films and helps them stand out. Batman: The Long Halloween Part One is the third film in this new line of DC animated films, which focuses on Batman, Jim Gordon, and Harvey Dent having to team up and face the notorious Holiday Killer. Godzilla vs Kong Movie Review: An Epic Monster Bash Dragged Down by a Disjointed Plot (LatestLY Exclusive).

It has a sequel which is scheduled to come out in July that will close out this two movie ark which is based on the DC comic of the same name written by Jeph Loeb. Batman: The Long Halloween Part One fairs well as it’s able to take that storyline and not make a frame-by-frame copy of it, but update some of its scenes and still be true to the vision of the comic.

Batman: The Long Halloween has been an influential comic as it has inspired the majority of Christopher Nolan’s The Dark Knight and some of its elements will be present in Matt Reeves' The Batman which is coming out next year. For a long time, fans have asked for an adaptation of this comic, and Batman: The Long Halloween Part One does deliver a worthy retelling of the classic story. As mentioned on the top, it does have a lot of scenes present from the comic but doesn’t focus on making an exact copy of it, it takes those moments and maintains the spirit of what the story is about. It helps the movie stand apart a bit from the comic while not really feeling a copy and paste of someone else’s work, Batman: The Long Halloween Part One lets its filmmakers be independent with its plot and that could have either worked or completely flopped, over here it does work really well. It’s a good risk taken by the makers and one that can be appreciated.

Talking about the voice acting, Jensen Ackles is able to deliver us such a convincing Batman who is seasoned at this work but isn’t above making mistakes. It gives Batman this sense of humanity which is absent from a lot of his animated work and you can relate to him a bit because it makes him seem like a human rather than a do it Mary Sue. Although we don’t get to spend more time with Bruce Wayne, you can still get hints of how Batman is taking over his persona while Bruce Wayne is slowly becoming the mask. Troy Baker reprises his role as The Joker after voicing him in Batman: Arkham Origins and Batman: Assault on Arkham. He again gives an exceptional Joker performance that can rival that of Mark Hamill’s voice work, and while his presence takes over the majority of the third part, it never feels like The Joker is taking away the Holiday Killer’s thunder. Josh Duhamel and Billy Burke as Harvey Dent and Jim Gordon also provide some great voice work, especially Duhamel as he sets up the inevitable fall of Harvey Dent in a great way.

The animation was also pretty slick, it doesn’t feel rather overly detailed or choppy, but the art style really does work for the story. Although I kind of hoped that the art style would have been a bit similar to the comic, this really does work for the story as well. It creates this dark sense of grittiness which compliments the nature of Gotham City rather well. Hopefully, DC continues with this art style for it really gives its animated films a great visual flair which has been needed for a while now.  Sweet Tooth Review: DC’s Netflix Series Is a Sweet, Hopeful Journey Through a Dystopian World (LatestLY Exclusive).

While Batman: The Long Halloween Part One maintains to be a good adaptation of its source material, it runs into the occasional pacing issues. A lot of it can be chalked up to its run time, clocking in at over 80 minutes, a lot of the first half feels slow and then it rather aggressively picks up its pace which can cause some of its character moments to be undercooked. Especially that of Bruce Wayne and Selina Kyle rather felt as an overthought and didn’t feel as naturally integrated into its storyline. Their relationship just felt a bit underdeveloped and didn’t have that much of an impact on the story. For Batman: The Long Halloween Part Two all I can hope is that it be better paced and there be some breathing room for the character interactions.

-The animation is great.

-Adapts the story beats of the comic pretty well.

-The voice acting is great.

-Bruce and Selina’s relationship is underdeveloped.

Batman: The Long Halloween Part One, while not perfect, still manages to stand as a worthy successor of its source material. It’s a treat to watch all the classic panels from the comic being remade and animated in an exceptional way as it never hinges off too far from the vision of the comic, but rather maintains a perfect balance of doing its own thing and honouring the work that came before it. Batman: The Long Halloween Part One is available for streaming right now with BookMyShow premiere at the price of 669.

(The above story first appeared on LatestLY on Jun 24, 2021 05:38 PM IST. For more news and updates on politics, world, sports, entertainment and lifestyle, log on to our website latestly.com).