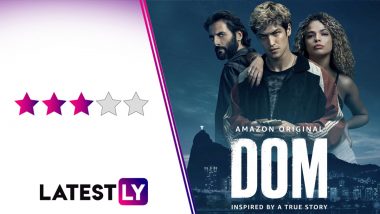 Dom Review: Dom is Amazon Prime Video’s latest offering in the realm of crime-drama. It’s inspired by a true story that follows a father who is a cop and his son who becomes a criminal. What you have here are eight episodes of crime drama that are interwoven with a father and son dynamic. For most of the series, it manages to stay gripping but ultimately falters due to its tonal inconsistencies. OTT Releases of The Week: Manoj Bajpayee's The Family Man Season 2 on Amazon Prime Video, Christian Convery's Sweet Tooth on Netflix, Patrick Wilson's The Conjuring 3 on HBO Max and More.

Dom does include some really good acting from both of its main leads. The show keeps switching from past to present so there are two actors portraying the same characters at times and they manage to contrast in a natural way as you learn more about their lives, especially the character of Pedro as you see his decline into the life of crime and can’t help but feel bad about it. The show really shines with its characters and I think it’s the high point of Dom.

The way it showcases the life of crime in the favelas of Rio de Janeiro also feels authentic for the most part. The set design is amazing, authentic and natural. This is in part was very important for the show to nail, because if the environment surrounding the story wouldn’t be up to its mark, Dom would then suffer because of it. The soundtrack is quite fun to listen to, there are some great music choices and the score itself suits the show really well. No one song really feels out of place and compliments the Dom in a nice way.

While Dom does hit the mark with the portrayal of crime in a realistic way, it often delves into glamourising its own story in an effort to maintain some stylistic creative visuals, and this in turn causes tonal inconsistencies. On one hand, you have Dom trying to be this gritty realistic crime thriller, but again at the same time it’s going over the top with its portrayal of crime, so it just makes Dom have conflicting tones and can lead to a break in immersion.

It also relies too heavily on flashbacks to flesh out its characters that it can just end up feeling like two different shows at a time. While yeah, they do help with character development, it just isn’t presented in a natural way. At one point you’ll be watching a scene taking place in the present and then the show cuts back to the past in the next scene. The progression of it just doesn’t feel natural at all rather it just feels jumbled. Not to say the pacing of the first few episodes feels off as well. Every episode ranges somewhere around from 50 to 60 minutes, but it just feels that a lot of it is padded out with filler in an effort to make it longer.

- Over reliance on flashbacks

- Cut to flashbacks aren’t done in a natural way

Dom, while still effective in presenting its story, eventually falls flat in some places due to some script and structural issues. Had the story been more air-tight and had it stuck to one tone it could have been a great eight hours of television. Even though it does have its problems, Dom is still a digestible show that will leave you entertained by the end of it. The Brazilian series is streaming on Amazon Prime Video.

(The above story first appeared on LatestLY on Jun 05, 2021 08:10 PM IST. For more news and updates on politics, world, sports, entertainment and lifestyle, log on to our website latestly.com).