Miley Cyrus and Katy Perry performed alongside the 73-year-old nine-time Grammy winner during a tribute. Parton belted out classics such as 'Jolene', '9 To 5' and 'Here You Come Again'. 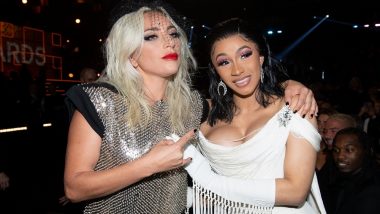 Los Angeles, February 11: Female musicians such as Kacey Musgraves, Cardi B and Lady Gaga shone bright at the 2019 Grammys, making history by taking home top awards in categories generally dominated by male artistes. A year after the award ceremony faced severe criticism for its lack of female representation, the Recording Academy seemed to make amends by giving women the stage as winners, performers and host. Women had "stepped up" in a big way as best new artist winner Dua Lipa pointed out, in an apparent dig at outgoing Recording Academy president Neil Portnow. Portnow had created a furore last year by saying that women needed to "step up" if they desired more representation at Grammys.

With Alicia Keys as a host, the first female emcee after a gap of 14 years, the ceremony was in for a major revamp. Keys pulled the night's biggest surprise by inviting her "sisters" -- former First Lady Michelle Obama, Gaga, Jennifer Lopez and Jada Pinkett Smith -- on the stage. Obama spoke about how music has played a crucial role in her life, particularly in the last one decade. Grammy Awards 2019 Updates: Cardi B, Lady Gaga, Dua Lipa Win at the 61st Grammys.

"It (music) allows us to hear one another, to invite each other in. Music shows us that all of it matters - every story within every voice, every note within every song," Obama said amid loud cheers from the audience. Musgraves's four wins, including the biggest prize, album of the year, capped the ceremony's female dominion. She defeated the likes of Brandi Carlile, Drake, Black Panther: The Album (various artists), Post Malone, Cardi B and Janelle Monae to win the award. Grammy Awards 2019: Cardi B Makes History, Becomes First Solo Female Artiste to Win Best Rap Album for ‘Invasion of Privacy’.

The last country LP to win Album of the Year was Taylor Swift's ' Fearless' in 2010. Musgraves also took home trophies for best country album, best country song and best country solo performance. "It was unbelievable to be even in a category with such gigantic albums ... it's really crazy. But I'm very thankful. Art is really thriving and it's been really beautiful to see that. I would have nothing without songs. To me, it's just all about the songs," Musgraves said in her speech.

Cardi B created history by becoming the first solo woman to win best rap album for 'Invasion of Privacy', beating out Nipsey Hussle, Pusha T, Travis Scott, and the late Mac Miller. The rapper accepted the award with her husband Offset. The musician said she was still in the middle of making the album when she found out that she was pregnant with her daughter Kulture.

"And then you know, you know how it was, we was like, we have to get this album done so I could still do videos while I'm still not showing. And it was very long nights," Cardi B said in her speech. "I can't breath. Oh my goodness. The nerves are so bad!" She added with a laugh, "Maybe I need to start smoking weed." While Cardi B is the first woman to win the award for a solo act, Lauryn Hill did win best rap album as part of hip-hop group Fugees in 1997.

Gaga and Bradley Cooper won best pop duo performance and best song written for visual medium for "Shallow" from "A Star Is Born". She also took home trophy of best pop performance for "Joanne". Lipa, who also won the dance recording award, said it was an honour to be nominated alongside great female artistes. Her fellow new artist nominee H.E.R. took home best R&B album. "Where I want to begin is by saying how honoured I am to be nominated alongside so many incredible female artists this year."

"I guess this year we've really stepped up?," she added with a smile. Actor Donald Grover's musician alter-ego Childish Gambino's "This Is America" marked the first time a rap number won for song of the year and record of the year but he gave the ceremony a miss. Rapper-singer Drake made a surprise appearance to accept his best rap song award for "God's Plan' and used his time on the stage to throw some shade at the Recording Academy.

"This is a business where sometimes it is up to a bunch of people that might not understand what a mixed race kid from Canada has to say…" "You've already won if you have people who are singing your songs word for word, if you are a hero in your hometown. If there is people who have regular jobs who are coming out in the rain, in the snow, spending their hard-earned money to buy tickets to come to your shows, you don't need this right here, I promise you, you already won," Drake said.

Carlile won three Grammys, including best American album for 'By the Way I, I Forgive You'. Ariana Grande, who gave the ceremony a miss over a disagreement about her set at the ceremony, won best pop vocal album, her first Grammy. Obama was not the only big draw at the star-studded ceremony as music icons Dolly Parton and Diana Ross delivered inspiring performances.

Miley Cyrus and Katy Perry performed alongside the 73-year-old nine-time Grammy winner during a tribute. Parton belted out classics such as 'Jolene', '9 To 5' and 'Here You Come Again'. Ross celebrated her 75th birthday on the stage by performing her hits such as 'The Best Years Of My Life' and 'Reach Out And Touch'.