Beyond uncredited appearances, Damon is known for his roles in films like Good Will Hunting, The Talented Mr Ripley, the Bourne franchise, Contagion, The Martian, Ford V Ferrari among other films. He had also won an Oscar for writing, shared with best buddy Ben Affleck, for Good Will Hunting. 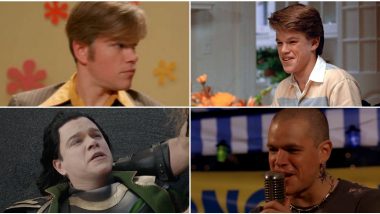 When you watch a Hollywood film - be it a blockbuster or an indie flick - be sure that you watch it very carefully. Pretty sure that there is a chance that you might have missed Matt Damon in that. The actor, known for his likeable personality and for playing some fantastic characters, is known to make some very surprise cameos in some very unexpected films. And if you love the watch The Jimmy Kimmel show, you also know that he loves to unexpectedly pop up there as part of a long-running 'feud' between him and the host. Amid COVID-19 Outbreak, Matt Damon’s Contagion Gains Popularity; Here’s Where You Can Binge Watch the Movie Online.

Beyond uncredited appearances, Damon is known for his roles in films like Good Will Hunting, The Talented Mr Ripley, the Bourne franchise, Contagion, The Martian, Ford V Ferrari among other films. He had also won an Oscar for writing, shared with best buddy Ben Affleck, for Good Will Hunting. But recently thanks to his surprise appearances in films like Thor: Ragnarok and Deadpool 2, his cameos are more often talked about.

So as Matt Damon turns 50 (really?), we look at some of his awesome cameos across the years, some that you noticed and some that you didn't.

In his debut film, Damon had a small role of that of Steamer. His future Ocean's 11 co-star Julia Roberts played the main lead in the film.

Matt Damon appeared a lawyer in the final scene of this drama, starring Sir Sean Connery. Interestingly, Finding Forrester shares a similar premise as Good Will Hunting, both films directed by Gus Van Sant. This is also Damon's first official cameo. Matt Damon Birthday Special: From The Martian to Good Will Hunting Here are the Actor's Memorable Dialogues (Watch Videos).

Jay and Silent Bob Strike Back

Damon and Affleck are good friends with director Kevin Smith, and they often make cameos in his films. Like in this meta comedy, they appear as fictionalised versions of themselves shooting for Good Will Hunting 2, purely for money reasons. The last being obvious by the fact that we also have Gus Van Sant literally checking the money.

The Third Wheel is one of Damon and Affleck's film productions, though neither play the lead here. While Affleck had a supporting role, Damon had a cameo, playing Denise Richards' character's jerk of an ex-boyfriend. Ford v Ferrari Movie Review: Christian Bale, Matt Damon Set the Trail Blazing in James Mangold’s Spirited Racing Drama.

Confessions of a Dangerous Mind

In one of his best surprise cameos, Matt Damon, along with Brad Pitt, appeared as two contestants on Chuck Barris (Sam Rockwell)'s dating game show. The funny part is both of them lose to a total guy-next-door. Confessions of a Dangerous Mind is directed by George Clooney, Damon's Ocean 11 and Syriana co-star.

Who expected Matt Damon to appear in a raunchy (but quite underrated and hilarious) teen comedy, that too as a bald punk band singer? Viewers of Eurotrip were in for a surprise when Damon made an appearance during a party scene, singing the catchy "Scotty Doesn't Know"? BTW the song's lyrics are about him doing the business with the protagonist Scotty's now ex-girlfriend!

This Kevin Smith drama has Ben Affleck play the lead, while bestie Damon makes a cameo of a PR Executive, along with Jason Lee.

Just how can you say No to the man who gave us Apocalypse Now and The Godfather trilogy? That's what made Matt Damon agree to play a small cameo in this underseen film as an American WWII officer, trying to recruit Tim Roth's character.

Matt Damon's participation in Christopher Nolan's sci-fi spectacle space travel film was known during the casting stages. But the makers kept the details of his role wrapped tightly shut till the film came out. He plays Dr Mann, an astronaut, who is much revered and is sent to find a hospitable planet. But he is driven crazy by the isolation, being stuck in an icy planet for years. A little trivia - Damon was supposed to play Harvey Dent aka Two-Face in Nolan's superhero masterpiece The Dark Knight, a role that was later played on by Aaron Eckhart.

In one of funniest cameos, Damon surprised all Marvel fans when he appeared in Taika Waititi's Thor: Ragnarok. He played an actor portraying Loki in a play, that also had Sam Neil and Chris Hemsworth's brother, Luke.

Steven Soderbergh's experimental thriller made news for being entirely shot on iPhone. The movie also created little ripples for Damon's uncredited appearance as an FBI officer.

A few months after Thor: Ragnarok, Marvel fans were in for another surprise when Damon made a cameo in Deadpool 2. Oh, wait a minute! Actually no one recognised Damon and his fellow co-star Alan Tudyk, so good were their makeup and accents. They played the two rednecks talking about toilet paper when Josh Brolin's Cable lands in the present from the future. Deadpool 2 also had the fleeting but hilarious Brad Pitt cameo. Deadpool 2: 9 of the Best Gags, Cameos and Surprises in Ryan Reynolds' R-Rated Superhero Film.

In this much-awaited sequel to Jay and Silent Bob Reboot, Damon again makes a cameo, but this time he reprises his role of Loki, err.. not from Thor: Ragnarok, but the one he played Smith's irreverent religious satire, Dogma.

Honourable Mentions: Chasing Amy, The Majestic (voice cameo), Che - Honourable, because we couldn't find the videos for these special appearances.

(The above story first appeared on LatestLY on Oct 08, 2020 09:21 AM IST. For more news and updates on politics, world, sports, entertainment and lifestyle, log on to our website latestly.com).