Halle Berry recalls the time when Pierce Brosnan saved her life on the sets of their James Bond movie, Die Another Day. 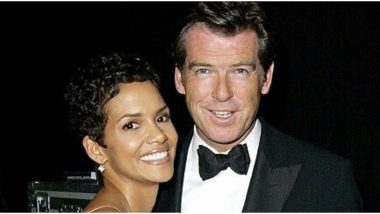 Movie shootings are rigorous at times. While we have heard instances of how stunt sequences can go wrong and end in a deadly mishap, Halle Berry would beg to differ. Well, not for stunt sequences going wrong but for the fact that mishaps can occur in any scenes. The X-Men actress in the Tuesday's episode of Jimmy Kimmel Live via video chat recalled the time when she ended up choking on a fig on the sets of Die Another Day and how her co-star Pierce Brosnan helped her out. Daniel Craig to Sport the James Bond Tuxedo Once Again As No Time To Die Is Not His Last Bond Movie (Read Deets).

"One time I was doing a scene with Pierce Brosnan on Die Another Day and I was supposed to be all sexy and trying to seduce him with a fig and then I end up choking on it," she recalled while adding how he had to get up and do the Heimlich. "He was there for me. He will always be one of my favourite people in the whole world," she continued. Pierce Brosnan Would Love to Return to James Bond Franchise as a Villain, Reveals Quentin Tarantino Once Pitched a Bond Film to Him.

Imagine a love scene going for a toss 'cos you ended up choking on an object that was supposed to seduce your on-screen partner! As Berry rightly said, "So not sexy. You should've seen it. Like, James Bond knows how to Heimlich." Die Another Day was Brosnan's last outing as James Bond and Daniel Craig soon took over the realms from him. If Quentin Tarantino's opinion is to consider, Brosnan was the best Bond of all time. Hmm... better than Sean Connery? We don't think so.

(The above story first appeared on LatestLY on Apr 22, 2020 11:42 PM IST. For more news and updates on politics, world, sports, entertainment and lifestyle, log on to our website latestly.com).