Pop star Katy Perry has revealed what her fiance and actor Orlando Bloom's "worst habit" is. She said it is leaving used dental floss all over their bathroom. 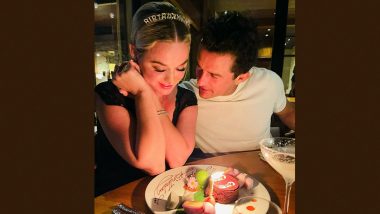 Pop star Katy Perry has revealed what her fiance and actor Orlando Bloom's "worst habit" is. She said it is leaving used dental floss all over their bathroom. After being asked what bad habits her fiance has, the 37-year-old singer told hosts Amanda Holden and Jamie Theakston: "Oh my God, he loves to floss, which thank God because some partners don't and it's disgusting and he has brilliant teeth. Katy Perry Wishes Orlando Bloom on His 45th Birthday With an Adorable Note, Says ‘You Are the Love and Light of My Life’ (View Pics and Videos).

"But he leaves the floss, everywhere! On the side of my bed, and in the car, and on the kitchen table, I'm like, 'There are bins everywhere'." The 'American Idol' judge also gave some insight into her family's delayed but "amazing" Christmas celebrations, which took place on January 2 - and how it was the "favourite" Christmas she had ever had in her life, partly because of her daughter reaching an age where she understood what was happening. Orlando Bloom Cannot Take His Eyes off Katy Perry As He Wishes the Pop Star on Her 37th Birthday! (View Pic).

Perry, who shares 16-month-old daughter Daisy with the 'Pirates of the Caribbean' star, said: "I celebrated Christmas with my family, which was amazing. "It was my favourite Christmas actually because my daughter's now 16 months, and she's aware of presents and we wore Christmas jammies but we celebrated on January 2, so everybody was done with Christmas, and it was like, everybody wakes up, because Covid has been crazy.

The 'When I'm Gone' singer, who began her Las Vegas residency 'Play' on December 29, 2021 at Resorts World Las Vegas, said how she keeps her show on the road despite the uncertainty due to the Covid pandemic, such as creating bubbles. She said: "And I've been in a bubble, trying to save the show, so that the show goes on, even if the show is on the Titanic."

(The above story first appeared on LatestLY on Jan 18, 2022 10:35 PM IST. For more news and updates on politics, world, sports, entertainment and lifestyle, log on to our website latestly.com).