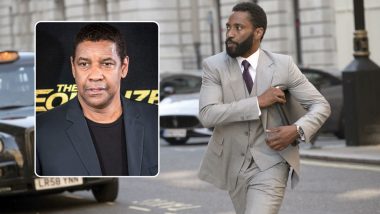 Tenet actor John David Washington says he used to hide the fact that he is the son of Hollywood star Denzel Washington initially during film auditions. John David Washington, who currently headlines filmmaker Christopher Nolan's much-awaited "Tenet", told Mr Porter website he wanted to have a "sense of normalcy" and that's why he would "lie" about his father's job. "I saw how people changed when they found out who my father was. I used to lie, saying he was a construction worker or in jail, just to have some sense of normalcy. Tenet China Release Date: Christopher Nolan’s Next Books September 4 Slot for the Chinese Audiences

"I felt like there was no way people would take me seriously, even if I was good. They would always judge me. So I hid who my father was. I guess I was protecting myself," the 36-year-old actor said. John David Washington is the eldest of Denzel Washington and actor Pauletta Washington's four children.

He started his acting career with the HBO series "Ballers" and found global success with the Spike Lee film "BlackKklansman". Tenet: The New Promising Teaser of Christopher Nolan’s Next Makes the Long Wait Unbearable (Watch Video)

In "Tenet", John David Washington stars alongside the likes of Robert Pattinson, Elizabeth Debicki, Dimple Kapadia, Michael Caine, and Kenneth Branagh. The film is slated to be released in the US on September 3.