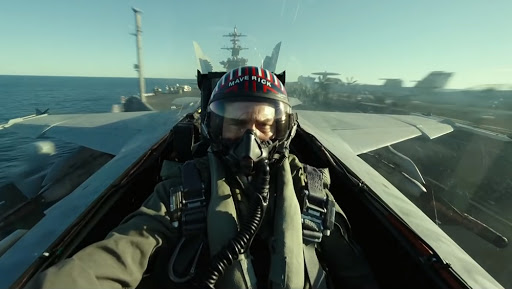 Los Angeles: The new Top Gun: Maverick trailer features the F-14 Tomcat, the supersonic fighter jet that shared as much screen space as Tom Cruise in the original 1986 film, Top Gun. The United States Navy, incidentally, discontinued the Tomcats in September 2006. The logic forwarded for bringing back the retired fighter jet in the sequel is simple: The F-14 Tomcat played an important part in the 1986 original movie. Since Cruise as Pete Maverick Mitchell hasn't retired in the sequel, the jets have to be around, too. Tom Cruise’s Jacket in Top Gun 2: Maverick Trailer Sparks a Controversial Debate as Taiwanese and Japanese Flags Go Missing

The F-14 Tomcat was essential to be around in the new film, to render authenticity and heighten the action drama, reports screenrant.com. In Top Gun, Cruise as Maverick was seen flying the F-14 Tomcat, which became an iconic plane shortly after the release of the 1986 film. The aircraft, introduced in 1970, received an upgrade the next year, in 1987. However, owing to cost factors, the F-14 Tomcats were discontinued in September 2006. Top Gun: Maverick Trailer: Tom Cruise Returns with a Sequel to his 1986 Classic and It’s Pretty Awesome

Now, 33 years after the first film, the Tomcat will once again be seen on the Hollywood screen. Whether the jet appears in a flashback sequence or whether Cruise as Maverick actually flies one remains to be seen. Released in 1986, Top Gun was apparently inspired by a magazine article on Navy pilots. The film followed the life of a fighter pilot and launched Cruise's career as a global action star. Top Gun: Maverick is directed by Joseph Kosinski, and also stars Jennifer Connelly, Jon Hamm, Glen Powell and Lewis Pullman. It is slated to release in mid 2020.