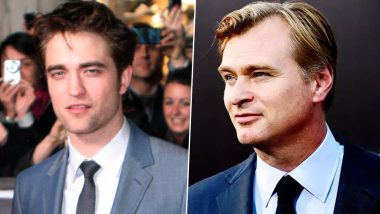 Actor Robert Pattinson has revealed that he lied to his “Tenet” director Christopher Nolan to make it to the screen test for Matt Reeves' superhero movie “The Batman”. In an interview with The Irish Times, the British star said that he cited “family emergency” for his absence from the sets of “Tenet”, but the filmmaker was quick to figure out the truth. “It's funny because Chris is so secretive about everything to do with his movies. And then I had to be really secretive about Batman stuff. Batman: Matt Reeves to Release the Preview of Robert Pattinson’s Superhero Movie Online at DC Fan Dome on August 22

"So I had to lie to Chris about having to go for a screen test - I said I had a family emergency. And as soon as I said 'it's a family emergency' he said: 'You're doing the Batman audition, aren't you?''' Pattinson said. The 34-year-old actor added that Nolan's much-anticipated espionage thriller helped him in his “The Batman” audition as he had gotten extremely fit from trying to keep up with co-star and former football player John David Washington on sets. Here’s What Zack Snyder Has to Say About Robert Pattinson’s The Batman!

While Pattinson is looking forward to the release of “Tenet”, which has been delayed due the coronavirus pandemic, he was shooting for Warner Bros' DC superhero movie when the production was shut down amid the COVID-19 outbreak. “The Batman”, which also stars Zoe Kravitz, Andy Serkis, Colin Farrell, Paul Dano and Jeffrey Wright, will release in October 2021.