Here's What Zack Snyder Has to Say About Robert Pattinson's The Batman!

Snyder's take on Batman was loved by many and hence, the director was recently asked about what he felt about Pattinson's casting and also about Matt Reeves bringing a new Batman film. 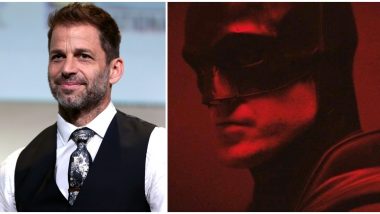 Zack Snyder has been in the news recently mainly because fans are finally getting what they hoped for. The release of Zack's Snyder Cut of Justice League which is slated to release on HBO Max. The director introduced the most recent onscreen Batman, Ben Affleck, to the world with Batman v Superman: Dawn of Justice and now Matt Reeves is all set to present Robert Pattinson as the caped crusader in his upcoming The Batman. Snyder's take on Batman was loved by many and hence, the director was recently asked about what he felt about Pattinson's casting and also about Matt Reeves bringing a new Batman film. Avengers: Endgame Director Russo Brothers React to 'Snyder Cut' and Reveal if Marvel Ever Interfered with Their Vision.

Recently in an interaction with Beyond The Trailer, Zack spoke about the upcoming Batman film. An enthusiastic Snyder was quoted saying," I'm super excited about that, by the way."Singing praises for director Matt Reeves, Snyder said, "Reeves is an amazing filmmaker". Not just this, reacting to Robert Pattinson's casting as Batman, which had become quite a discussion ever since its announcement, Zack said, "Robert’s cool, I just think it’s great. I’m a fan, so I’m excited.”Justice League: Zack Snyder Shares First Terrifying Look of Darkseid From Snyder Cut That Will Release On HBO Max.

As for his own project, the Snyder Cut, the director said, "I think really the big pressure on me is just for it [Justice League] to be exactly true to itself. And I know that sounds obvious but we as storytellers and as filmmakers a lot of times there’s a lot of different powers that push and move and change what you’re doing as you’re doing it." The Snyder Cut, as well as Matt Reeves' The Batman, are slated for a 2021 release.

(The above story first appeared on LatestLY on Jul 21, 2020 04:40 PM IST. For more news and updates on politics, world, sports, entertainment and lifestyle, log on to our website latestly.com).