With Val-Zod Superman Announcement, 5 Other Alternate Superheroes We Would Like To See in Michael B Jordan’s Live-Action Series!

With the Val-Zod Superman announcement, we are taking a look at five other alternate versions of superheroes that we would like to see be adapted for live-action. Read on. 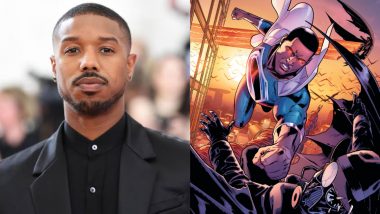 This past week, DC fans were taken by surprise when it was announced that a new Superman show for HBO MA is in development. The series is going to star Michael B Jordan in the role of Val-Zod aka Superman of Earth 2. After Ta-Nehisi Coates' Superman film being in the script stages, this is the second Superman project that will feature a black actor as the Man of Steel. After a long series of rumours and speculations, it is great to see that this project is finally being realised, and with Michael B Jordan’s passion for the character, this announcement has us excited. Masters of the Universe Revelation Review: Kevin Smith’s New Animated Series Has the Power of Grayskull in Full Force! (LatestLY Exclusive).

Now you may be asking who Val-Zod exactly is, and that’s valid because he is an alternate version of Superman from a different Earth. After having his parents executed by the Kryptonian council, Val befriends Kara-Zor El and escapes Krypton before its destruction thanks to Jor-El. Crashlanding on Earth, he is recruited by the new Wonders to defeat a brainwashed Superman. He is taken in by Lois Lane then who helps him in developing his powers. It’s great to see a new version of Superman that isn’t focused on Kal-El, it will help in bringing attention to this lesser-known character who has his own unique story to tell. So with the recent announcement, we are taking a look at five other alternate versions of superheroes that we would like to see be adapted for live-action. Loki: Chris Hemsworth Had an Extended Cameo as Throg, Reveals Director Kate Herron; Here's Why It Got Cut!

Talking about alternate versions of Superman, we would love to see a spin on this version of the Man of Steel. While there is an animated movie of him existing, a live-action version of this iconic storyline by Mark Millar would be fantastic. It follows Kal-El's crash landing in the early USSR and being raised by Stalin who then turns Superman into a weapon. With Jordan Vogt-Roberts of Kong: Skull Island fame campaigning for the project, we hope a movie on this gets made soon. Spider-Man No Way Home: Here's Why Fans Are Expecting Charlie Cox's Daredevil to Appear in Tom Holland's Upcoming MCU Flick?

Venom is one of Spider-Man’s biggest foes and has received quite a popularity boost thanks to the 2018 Tom Hardy film. With there already being two incarnations of Eddie Brock’s Venom, we would like to see the version of Flash Thompson being explored on screen. With Venom finding a perfect host in Flash Thompson, he becomes an anti-hero and takes up the mantle of Agent Venom. He is quite an interesting character and with some great comic runs, there are a lot of stories with him to be told.

With Miguel O’ Hara already making his big-screen debut in Spider-Man: Into the Spider-Verse, we would love to see him being brought over to live-action as well. With how vibrant and aesthetic the world of Nueva York is, Spider-Man 2099 could easily be one of the most visually pleasing superhero films ever. Hopefully, with Spider-Verse two, Sony fast tracks a project on this character.

With the Flashpoint Paradox, we were introduced to the Thomas Wayne version of Batman. In this universe, it is Bruce Wayne who dies which leads Thomas Wayne to become Batman and Martha Wayne to become Joker. It could make for quite an interesting movie if done correctly considering how the morals for this Batman are different from Bruce Wayne’s.

(The above story first appeared on LatestLY on Jul 26, 2021 04:31 PM IST. For more news and updates on politics, world, sports, entertainment and lifestyle, log on to our website latestly.com).