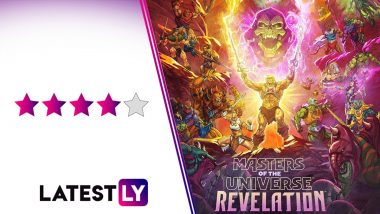 Masters of the Universe: Revelation is a blast from start to finish. It’s not perfect by any means, but it is exactly what you would expect from a property that ruled our childhood in the '80s. It takes an already good established base and expands on it by making it more serialized and mature. In no way is it mature like a proper adult animated show, but rather mature in the sense of its themes and stakes. We Have a Ghost: Anthony Mackie, David Harbour to Lead Netflix’s Upcoming Family Adventure Film.

The plot here feels heavy and impactful. Masters of the Universe was well known for being a fun show that you would want to just kick back and watch on a chill afternoon, but here you feel that the stakes are higher. You care about the characters wanting to achieve their goal and succeed, and Masters of the Universe: Revelation succeeds in this matter. You can feel a sense of maturity with how the show is crafted. The people who were originally a fan of these characters have grown up, and so the show has to adhere to those aspects of the fanbase. Kevin Smith himself being a He-Man fan, perfectly encapsulates a sense of seriousness and fun that’s needed to evolve a property like this.

With the show called Masters of the Universe: Revelation, the first five episodes heavily focus on Teela, though. Don’t worry He-Man fans, you’ll get plenty of him here but he takes a backseat, at least for these batch of episodes. In a way having Teela be the center of focus is great, it provides some much needed character development and is done in the service of telling the story. It never feels like the creators are disrespecting the characters, but rather honoring them. From the first episode onwards, which felt like a classic episode from the ‘80s show, you know this is something special. From there on Masters of the Universe: Revelation is just a crazy ride.

All the characters feel well represented here. They are voice-acted perferfectly, especially Evil-Lyn who is voiced by Lena Headey and Skeletor who is voiced by veteran Mark Hamill. He brings this sense of maniacal state to Skeletor. Hamill somehow is able to translate the pitch of his Joker voice over here and still sound different. I think it was a perfect choice to bring in Mark Hamill to do the voice of Skeletor. He honours the work of Alan Oppenheimer and is able to be funny and menacing in the role. Chris Wood lending his voice to Prince Adam/He-Man is also another homerun. He perfectly brings the masculinity and macho ‘80s vibe to He-Man. How he differentiates his voice from Prince Adam to He-Man is just a joy to listen to. But the star of the show here is Sara Michelle Geller as Teela, considering she had to carry the show, she does a great job by giving Teela a leadership personality.

With the show maturing with its audience, you would expect the characters to mature here too. While of course we have touched on Teela’s character development, the legacy characters here also have a much well defined personality to them. While the on brand cheesiness of them is still maintained, it never clashes with the tone and disrupts the adventure. Evil-Lyn and Orko are especially well done here. The exploration of both these characters is a joy to witness and helps in bringing a much needed attention to them. It proves that Masters of the Universe is larger than He-Man and that there are characters with larger stories to be told.

Developed by Powerhouse animation of Castlevania fame, they do an amazing job of bringing these characters to life. A huge Masters of the Universe fan myself, I remember playing with toys of He-Man and Skeletor as a child and imagining these huge battles in my head while screaming, “I HAVE THE POWER!” in my living room. Watching Masters of the Universe: Revelation, it felt like these were the battles that I had imagined in my head. It never delved into the realms of fan service, but rather focused on telling a good story and taking the people who grew up with these characters on an amazing ride. If you’re a newcomer to the series, then fear not, you can jump in right over here and still get the major beats of the story. The original score by Bear McCreary also does an amazing job at filling the scenes with this raw sense of energy. It’s a fun score that I can definitely see myself listening to on repeat.

For complaints, I don’t have many. The most nitpicky side of mine wants to say that the story after the first episode, takes a while to start going. But even when you get into the thick of it, it is just a wild ride from there.

- Evolution of the property itself

- Story takes a while to begin

(The above story first appeared on LatestLY on Jul 23, 2021 07:21 PM IST. For more news and updates on politics, world, sports, entertainment and lifestyle, log on to our website latestly.com).