Loki: Chris Hemsworth Had an Extended Cameo as Throg, Reveals Director Kate Herron; Here's Why It Got Cut!

Loki ended its season one last week with a bang. It packed a solid final three episodes which set up the next phase of the Marvel Cinematic Universe (MCU). MCU even found its new potential big bad in Jonathan Majors’s Kang, who had his debut in the final episode of Loki. 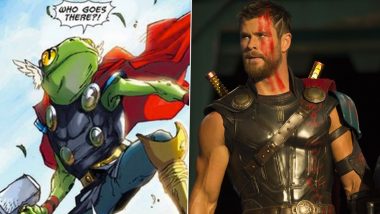 Loki ended its season one with a bang. It packed a solid final three episodes which set up the next phase of the Marvel Cinematic Universe (MCU). MCU even found its new potential big bad in Jonathan Majors' Kang, who had his debut in the final episode of Loki. With all the potential Multiverse concepts introduced in this series, it surely has us excited for what’s to come next. While Loki was amazing, the episode that has stuck the most with fans is episode five, Journey into Mystery. It featured a great dozen of Easter Eggs involving things like the fan favorite ThanosCopter, A statue of the Living Tribunal, A SHIELD helicarrier and a Yellow Jacket Helmet. From WandaVision to Loki, 7 Best Characters Introduced in MCU Through Marvel Disney+ Shows So Far! (LatestLY Exclusive).

The episode even set up the appearance of Kang with the appearance of Alioth and the Avengers tower having Queng written on it. But one Easter Egg that stuck with the fans most, was the appearance of Throg. The God of Thunder, but turned into a frog by Loki. The appearance was quite brief and it featured Throg trapped in a glass jar grunting. Director Kate Herron recently revealed in a podcast that it was Thor himself, Chris Hemsworth, who voiced Throg. You can check out her discussing the Easter Egg here below. Loki Season Finale: 6 Baffling Questions That Are Bothering Us About the Marvel’s Disney+ Series.

In a recent discussion with Syfy Wire Kate Herron went on to reveal how there was originally involving both Throg and Loki interacting with each other. It was although left on the cutting room floor because it didn’t fit quite well with the tone that they were going for. Discussing the appearance she had to say “In terms of Frog of Thunder, we had a scene that originally was in Episode 1, and it just wasn't quite… the scene was very funny as a standalone scene, but it happened basically right before Loki saw his mother dying, and tonally it just wasn't feeling quite right for what we should be doing in that moment. And so we didn't end up using that bit.”

She later went on to add that they didn’t want Hemsworth’s work to go to waste, so she added the Throg scene in episode five. She had this to say “I had the shot design in Episode 5 where I knew I wanted to go through the dirt, down into the lair, and I think in my head I was always kind of like, "OK, insert Easter egg, and we'll find one that works for it." And I think we were kind of circling a few things, but then when, obviously when I knew that frog wasn't going to be in Episode 1, I was like, "Oh, well we have to put him in episode five in that moment, because then at least we can get him in there." I'd recorded Chris for that scene in Episode 1, so…”

The appearance of Throg in episode one was originally revealed by Katie Holt in an interview with The Direct. It features Loki becoming the king of Asgard and then receiving a beatdown by Throg in a TVA timeloop. She also confirmed that you can see glimpses of the scene in the trailer for Loki, where it shows the God of Mischief in Asgard. While it’s a bummer that the scene with Throg got cut, it is great to see Marvel taking their stories seriously and cutting off a scene that could potentially hamper the tone. We do hope that Throg shows up in future because he is too fun of a character to not be done in live action. With season two of Loki confirmed, we would love to see that scene inserted in there somehow.

(The above story first appeared on LatestLY on Jul 21, 2021 04:41 PM IST. For more news and updates on politics, world, sports, entertainment and lifestyle, log on to our website latestly.com).